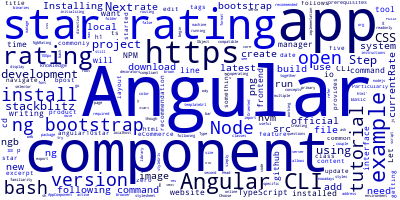 In this tutorial, we'll build a star rating component with the latest Angular 10 version and Bootstrap.

We commonly rate something between zero and five stars.

Before getting started you need a few prerequisites:

Note: If you don't want to install a local environment for Angular development but still want to try the code in this tutorial, you can use Stackblitz, an online IDE for frontend development that you can use to create an Angular project compatible with Angular CLI.

Let's begin by installing the latest Angular CLI 10 version (at the time of writing this tutorial).

Angular CLI is the official tool for initializing and working with Angular projects. To install it, open a new command-line interface and run the following command:

At the time of writing this tutorial, angular/cli v10 will be installed on your system.

In the second step, let's create our project. Head back to your command-line interface and run the following commands:

Next, navigate to you project’s folder and run the local development server using the following commands:

Open your web browser and navigate to the http://localhost:4200/ address to see your app running.

Next, we need to install ng-bootstrap using the following command:

This library provides an Angular implementation for Bootstrap 4 and also provides some useful components such as NgbRating -- a directive that allows you to display star rating bar.

Open the src/app/app.component.ts file and update it as follows:

Next, open the src/app/app.component.html file and update it as follows:

Next, open the src/app/app.component.css file and add the following CSS styles:

This is a screenshot of the output: 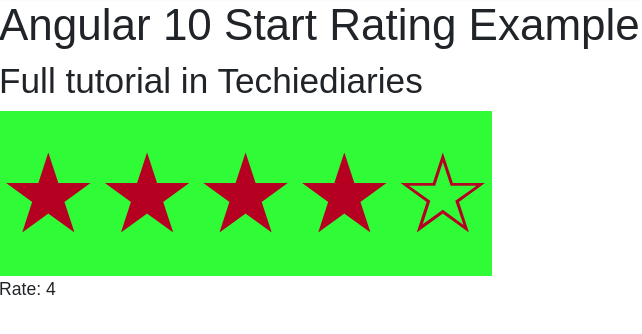 You can find this example in https://stackblitz.com/edit/angular-10-star-rating-example

In this short article, we've seen how to create a star rating component with Angular 10 and ng-bootstrap. Read the official docs for more details.