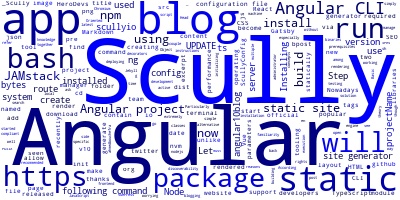 Scully can render your Angular 9+ app in the server side but can also be used as a blog generator with Markdown support which can be used as an alternative to popular generators such as Jekyll or Gatsby.

Scully is a JAMstack solution for Angular 9+ developers like Gatsby for React or VuePress for Vue.js. It's a static site generator renders your Angular 10 app to HTML and CSS and since it supports Markdown you can use it for blogging without worrying about SEO and search engine discoverability.

Create your Blog with Angular 10 and Scully

Now that we have seen some theory, let's see how to use Angular 10 and Scully to create a blog.

Let's get started with the prerequisites:

Angular CLI is the official tool for initializing and working with Angular projects. To install it, open a new terminal and run the following command:

At the time of this blog post, angular/cli v10 will be installed on your system.

Let's now create our project. Head back to your terminal and run the following commands:

Now, navigate in your project's folder and install Scully using the following commands:

The @scullyio/init schematic will automatically make all the required changes in your Angular 10 project.

This is the kind of output you'll get in your terminal if everything is ok:

The command will generate a Scully configuration file named scully.<projectName>.config.ts where the projectName is the name of your Angular project. This file will be used to configure various aspects of your static app.

This is the initial configuration file:

You can now render your Angular 10 app statically using Scully.

Please note that any routes in your Angular 10 project that contain route parameters will not be pre-rendered until you specify the required parameters in the Scully configuration file.

Before you can run Scully, you'll need to build your Angular 10 project using the following command:

Once your Angular 10 project is built, you can run Scully to build your static blog using the following command:

That's it! You now have a fast pre-rendered Angular 10 static site.

You can find the generated static files under the ./dist/static folder. It contains all the static pages of your application.

You can access the statically rendered app in the /dist/static folder where you can find an index.html file for each route in your Angular 10 app.

Scully provides its own server that enables you to run your JAMstack site. You can start the Scully's server by running the following command:

The command will start two servers, one of the ng build command and other for the static build which allow you to run both versions of your Angular app.

In this tutorial, we've seen how to use Angular 10 with Scully to build a static JAMstack app that can be used as a blog that all the performance and SEO benefits of typical blogs.