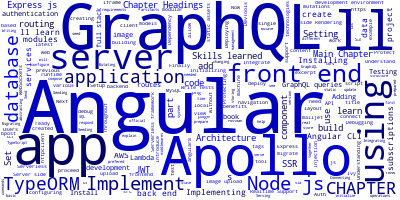 In this part, we’ll learn about our app’s architecture and requirements and we’ll set up our development environment for full-stack Angular 11 development. We’ll also set up a GraphQL server with Express.js and Apollo and connect a SQL database for storing the application data using TypeORM.

Throughout this book, we’ll build a full-stack web application with an Angular 11 front-end and a Node.js back-end so in this chapter, we'll first learn about the structure and the tools we need to build the app. Next, we'll prepare our machine for Angular, MySQL and Node.js development and initialize a new project based on the latest version of Angular. Finally, we’ll introduce you to debugging with the latest Angular’s Ivy runtime which will help you view and update your application state in DevTools.

CHAPTER 2: Setting up GraphQL with Node.js/Express.js and Apollo

After setting up the development environment, installing Node.js, and initializing the Angular front-end project using the CLI, we'll next need to set up a Node.js server with GraphQL support to implement the back-end. In this chapter, we'll explain how to install Express.js and configure it with TypeScript and GraphQL. We’ll add routing, static assets and cors. Finally, we'll learn how to test our GraphQL server and debug it using Postman, GraphiQL and Apollo DevTools..

CHAPTER 3: Connecting the Database with TypeORM

Now that we have a back-end ready that can respond to GraphQL queries and a front-end project. We'll need to connect our database to store our data. We'll be using TypeORM for abstracting the database operations which allows you to use any prefered database management system for your app without changing the code. We’ll see how to integrate TypeORM with Apollo and then migrate and seed our database.

In the previous part we have prepared both the development environment for Angular and created a GraphQL server with Express.js and Apollo. In this part, we’ll implement the front-end of our application using Angular and Apollo. We’ll add routing and navigation between various modules and components then we’ll finally implement real-time support using GraphQL subscriptions.

After creating the various artifacts needed in our app such as modules, services and components, we’ll introduce Angular routing and we’ll proceed to implement routing and navigation in our application to create a single page application.

CHAPTER 5: Integrating the Angular Front-End with the GraphQL Back-End

Angular allows us to create the front-end of our backend with a modular and component based architecture. In this chapter, we'll learn how to use the Apollo client to connect the front-end with the GraphQL backend.

We want to allow users to upload their images so in this chapter, we’ll learn how to upload images using Amazon Web Services, Angular and Express.js.

In this chapter, we’ll learn how to add realtime support to our application to fetch new data from the server without the need to constantly refresh the app. To achieve this we’ll use GraphQL subscriptions with Apollo.

After building our app in the previous part, now we’ll add server-side rendering to our app, test our code for any unexpected errors and we’ll deploy it to AWS Lambda using the Serverless framework..

At this point, we have a Single Page App with multiple routes and views thanks to client-side routing. In this chapter, we’ll learn about server-side rendering and its benefits and then we’ll proceed to implement SSR in our app.

We have written a lot of code in the back-end and front-end. In this chapter, we’ll learn how to write tests for our backend and frontend code to make sure everything works as expected. Next, we’ll build our app and deploy it to Heroku.

CHAPTER 11: Deploying your App with the Serverless Framework and AWS Lambda

Now that we have tested our code back-end and front-end’ code. In this chapter, we’ll learn about serverless and then we’ll build our app and deploy it to AWS Lambda using the Serverless framework.