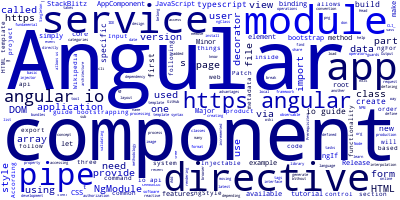 In this tutorial, we'll build a web application with Angular 9. Meanwhile, we'll learn about the fundamental concepts which you will need to know to do front-end web development with Angular, such as:

We'll use the online StackBlitz IDE, so head over there, register a new account using GitHub and START A NEW APP then choose the Angular workspace.

Let's get started by defining Angular, what is it and what its advantages?

Angular is a JavaScript framework written in a language called typescript (a compiled, typed and super language of JavaScript), used to create user interfaces or frontend apps, and was created by Google on October 20, 2010.

Angular is used to build web and mobile applications (Together with the Ionic framework).

Also, Angular is based on the SPA concept, i.e. it is used to build a single page application where the modules are loaded all at once from the browser and there is no need to load the page again while moving between pages, because inside Angular there is a client-side router abstraction, that works as a mediator that directs the browser during any process of moving from one page to another page.

Among the advantages of Angular is that it has very impressive micro services and fundamentals in terms of controlling the http services and methods where you can control the way to communicate with any external or internal API and allows a granular control of the request and the return response, and also there is a library called rxjs (reactive extensions for JavaScript)- This library and the operations inside it are used to control the creation of the asynchronous operations, whether inside Angular or in another API, such as observable, carchError, of, and many other operators.

Angular uses a command-line tool called the Angular cli, which is a very important tool. Without it, things can be difficult. One of its benefits is that you can generate components, services, models, modules, and many files only via a specific command. For example:

This command will generate a component with an html file, typescript file, css/sass file and unit testing file, all with just one command.

Angular uses a design pattern called the Singleton, meaning that there is a root module which is the basic module in the app and is called app.module by convention, and sub-modules that are used depending on the need of the system and are added in order to provide a commonly required functionality like routing, form processing, http requests, etc. These sub-modules must be defined inside the root module so the system can identify them.

You can create various artifacts with services, guards, and pipes, in order to create "guards" on each route in your user interface in order to make sure that the user has the the authorization to access a view.

Angular provides a great methodology of connecting data between html templates and typescript via something called property binding so that you can link data easily without the need for libraries like the jquery or native JavaScript APIs for directly accessing the DOM.

Angular also provides a very powerful method for creating and validating forms, and it has two methodologies for creating forms, the first methodology is called template-driven forms and the other one is called reactive forms which is built using an API called the form builder.

Angular services are classes that can be shared between more than one module and component and can encapsulate several methods, It can be used for common functionalities such as data retrieval, modification or deletion or other things. Services use the @Injectable decorator so they can be injected in any component or service via the Angular dependency injector.

Angular provides more than that, and with its multiple versions, more features are being added. With the latest Angular 9 version, a next generation compilation and rendering pipeline called Ivy is used by default. The final bundles are smaller and runtime performance is better than it was previously during the production process.

Who’s this Tutorial for?

In Software Development, apps are versioned by following Semantic Versioning, which is simply a convention that everyone starts to follow.

Angular also follows semantic versioning which has a Major.Minor.Patch format. We increment a specific section when there is a major, minor or patch release:

Major Release — The Major part is incremented by one if the new features break backwards compatibility,

Minor Release — The Minor part is incremented by one if the new features don’t break any existing features,

Patch Release —The Minor part is incremented by one 1 for releasing patch fixes.

The Angular team releases a new major version each six months and the last version, as of this time, is Angular 8:

You can follow with the latest versions from the CHANGELOG.

You’ll need to have some prerequisites to follow this tutorial:

Angular projects adhere to a modular and component-based architecture.

Angular makes it easy to create modules by providing NgModules:

A NgModule is a TypeScript class decorated with the @NgModule decorator which takes a few metadata that does the following:

Every Angular app has at least one module, conventionally called the root module. This is the module that gets bootstrapped for running the application.

Head over to your Angular project in the Stackblitz IDE. Open the src/app/app.module.ts file, you should see the following code:

At the top, we have some import statements. NgModule belongs to the @angular/core package.

After the imports, we configure the module by decorating the AppModule class with @NgModule and stating what components and directives belong to it (In the declarations array) as well as which other modules it uses (In the imports array). For more information on the structure of an @NgModule, you can read Bootstrapping from the official Angular guide.

There is more that you should know about modules but let's leave that to after you build your first app.

Now, let’s get to other piece of the puzzle or components. Simply put, a component controls a part of the UI of your application. For example, the header, footer, or whole page can all be components. Depending on how much reusability, you want in your code.

Technically, an Angular component is a TypeScript class decorated with the @Component decorator which is part of the Angular core.

A component has also one or more associated stylesheet files for adding styles to the component view. These files can be in many formats like CSS, Stylus, Sass or Less.

Head back to your project in Stackblitz, open the src/app/app.component.ts file, you should find the following code:

In this file, we export the AppComponent class, and we decorate it with the @Component decorator, imported from the @angular/core package, which takes a few metadata, such as:

An Angular application is composed of a tree of components, in which each Angular component has a specific purpose and responsibility.

A component is comprised of three things:

Currently, our app has three components:

The Component’s Input and Output

After understanding modules and components, let’s see what services are.

In Angular, a service is a singleton that can be wired with components or other services via Dependency Injection.

Don’t be intimidated by this term, it simply means that Angular (or a part of Angular, the injector) takes care of instantiating the services and provides the instance to the requesting component.

Typically, a component's job is to enable the user experience and nothing more. A component should present properties and methods for data binding, in order to mediate between the view (rendered by the template) and the application logic.

A component can delegate certain tasks to services, such as fetching data from the server, validating user input, or logging directly to the console.

By defining such processing tasks in an injectable service class, you make those tasks available to any component.

To define a class as a service in Angular, use the @Injectable() decorator to provide the metadata that allows Angular to inject it into a component as a dependency.

You need to provide a service before it can be available. This can be done in three ways:

Angular has its own template syntax which extends HTML with a set of useful directives that make it easy for developers to render data from the component in the view.

These are the common features of Angular's template syntax:

The Angular directive helps us to manipulate the DOM. You can change the appearance, behavior or a layout of a DOM element using the Directives. They help you to extend HTML. The Angular directives are classified into three categories based on how they behave. They are Component, Structural and Attribute Directives

The Angular pipes are used to Transform the Data. For Example, the Date pipe formats the date according to locale rules. We can pass arguments to pipe and chain pipes. The Angular also allows us to create the Custom Pipe