Convert HTML to PDF with Python 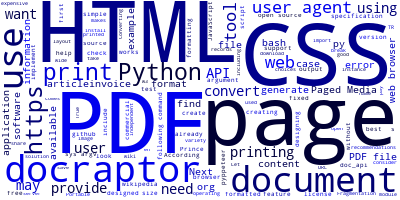 There is a wide variety of choices when it comes to creating a PDF from HTML in Python. In this article, we'll look at some open-source and commercial tools that are available and share our recommendations to help you find the tool that works best for you.

According to this article:

The Portable Document Format (PDF) is a file format developed by Adobe in 1993 to present documents, including text formatting and images, in a manner independent of application software, hardware, and operating systems.

Why Converting HTML to PDF

HTML is used to create layouts in web applications and sometimes you'll need to provide the information that's already presented to users in HTML to a PDF document. For instance, in eCommerce apps, you most likely need to provide documents such as, statistical reports, tickets and invoices to users as PDF documents so they can save them locally for records, have them emailed or print them.

Let's take the example of an invoice, the application may already display the information in the invoice with HTML and CSS, then provide a button that users can click to download the PDF document of the invoice for their records. That means the information is already formatted and available to the users. You only need to provide that in PDF format for download and printing. Therefore, a good solution to consider would be to check if it is possible to use that HTML and CSS to generate a PDF version.

PDF is a portable document format that's good for printing. CSS, also has a specification for print, refereed to as the Paged Media module. This makes CSS convenient for formatting things like books, catalogs and brochures which are not designed to be a web page in the first place.

The biggest difference, and conceptual shift, is that printed documents refer to a page model that is of a fixed size. Whereas on the web we are constantly reminded that we have no idea of the size of the viewport, in print the fixed size of each page has a bearing on everything that we do. Due to this fixed page size, we have to consider our document as a collection of pages, paged media, rather than the continuous media that is a web page. Source

You may also want to check out this article for more details about designing for print with CSS.

How to Generate PDF Files from HTML

For simple use cases, you can generate a PDF file right from your web browser without installing any third-party tool, by simply choosing to print to PDF instead of a printer. This may be enough for some use cases but it's also far from being satisfactory! Some of the inconveniences, include the presence of the headers and footers which are added by default when you print content from a webpage. It will also be formatted according to your print style-sheet in case there is one.

In case, you need more control, you may want to use a free tool called WeasyPrint which is a free and open-source software under the BSD license, designed for Python 3.5+ but it doesn’t fully implement all of the Paged Media features, however it has more than what's provided with the web browser out of the box.

Other tools which claim to support conversion from HTML and CSS to PDF include PDFCrowd, which allows you to generate PDF and screenshots from web pages and HTML documents in your applications and provides integrations with popular programming languages including Python but we can't find, in the documentation, what features of the Paged Media specification are supported.

There are also many HTML to PDF libraries that are available for Python developers such as:

If you prefer to use JavaScript instead of Python, check out this article that lists some of the free and commercial tools for converting HTML to PDF with JavaScript.

As mentioned before, if you want to properly produce paginated and formatted output and still stick to an HTML-and-CSS to PDF solution, you need a tool that implements the Paged Media features, you need to take a look at printing user agents.

According to this Wikipedia article:

In computing, a user agent is software (a software agent) that is acting on behalf of a user, such as a web browser that "retrieves, renders and facilitates end user interaction with Web content". An email reader is a mail user agent.

A browser’s user agent string (UA) helps identify which browser is being used, what version, and on which operating system. When feature detection APIs are not available, use the UA to customize behavior or content to specific browser versions.Source

Just like there are user agents for retrieving and rendering web pages i,e web browsers, there are also printing user agents which are designed for printing from HTML and CSS, and provides APIs for generating the PDF files. These User Agents have a better implementation of the Paged Media specification and better support for the CSS Fragmentation properties which allows you to have more control over the formatting your the PDF files.

CSS Fragmentation is a CSS module that defines how content is displayed when it is divided (fragmented) into several pages, regions or columns. Fragmentation occurs in many situations; in printing, it mainly occurs when an element spans a page break.

Some of the well-known printing user agents include:

Before you can use these printing user agents in your web applications, you'll need to buy a license and install them on your server but the problem with these tools is that they are expensive which may not be worth it for simple use cases. But if your business rely on producing printed documents with them, they can very well pay for themselves by reducing the development time.

If you still need to use the Prince API and don't want to host your own server or can't afford to buy the expensive license, you can use its API on a pay per document basis, via the DocRaptor service which provides an API powered by the PrinceXML HTML-to-PDF engine, with powerful support for headers, page breaks, page numbers, flexbox, watermarks, accessible PDFs, and much more.

You can use DocRaptor from within your Python application using the docraptor package.

Let's get started by creating a virtual environment using the following command:

Next, you can install docraptorfrom PyPI using the following command:

At the time of this writing docraptor v2.0.0 is installed.

Next, create a file that may be called convert.py:

Open the file and start by adding the following imports:

Next, create and instance of docraptor.DocApi as follows:

We use YOUR_API_KEY_HERE as username for testing the API without paying (test documents are free but watermarked) and we set debug to True to show debugging information on the terminal.

Next, add the following code to invoke the create_doc of the API as follows:

We call the API inside a catch..except block to catch any errors and print them on the console. We pass the first argument of our script to document_url to provide the URL of the page we want to convert to PDF; and the second argument as the file name of the outputted PDF file. We can also supply HTML content directly using document_content.

We set document_type to pdf to output a PDF file of the supplied URL; we can also use xls or xlsx formats.

Save the file. head back to your terminal and run the following command to test our script:

We pass the URL of the web page we want to convert as the first argument to the script, and the name of the output file as the second argument. The PDF file will be outputted on the same folder where the script resides.

You can find more details from the docs or more code examples in this GitHub repository.

When printing HTML content of web pages to PDF, you can use the web browser for simple cases such as continuously scrolling webpages but if you want to to generate multi-page documents, you need to use tools that implement the Paged Media specification; one of these tools is Prince but this maybe expensive plus you'll have to host your own server. This is where DocRaptor may be you best bet as it makes use of the Prince API behind the scene while offering a pay per document plan.