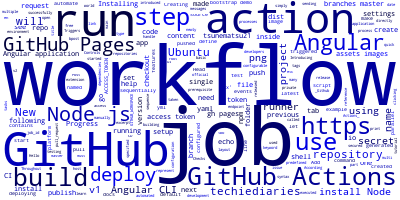 In this example, we'll see how to use Github Actions to install Node.js and Angular CLI 10 and then build and deploy our Angular 10 application or any previous version to GitHub pages.

Throughout this tutorial, we'll learn how to set up Github Actions in your Angular 10 project to build and deploy your app to GitHub pages.

As a prerequisite, you need to have an Angular 10 project pushed to a GitHub repository.

Github Actions are a newly released CI/CD platform that can be used by open source repositories for free. It's introduced by GitHub to help developers automate their project workflow.

Github Actions can handle many processes that can be triggered by a multiple of events on the platform such as:

They can also be triggered manually from the Actions tab in your repository or by sending a secured (using a private access token) HTTP Post request to a predefined endpoint.

GitHub Actions help you automate all your development workflows from building, testing, to deploying your application to your host directly from GitHub.

If you have an Angular project pushed to GitHub, let's see how you can create a GitHub Actions workflow to build, test, and deploy the Angular application to GitHub Pages.

A workflow is a configurable automated process made up of one or more jobs. You must create a YAML file to define your workflow configuration.

You can also create a folder named .github/workflows at the root of your Angular code repository with a workflow file that has the .yml extension.

You'll be taken to the following UI: 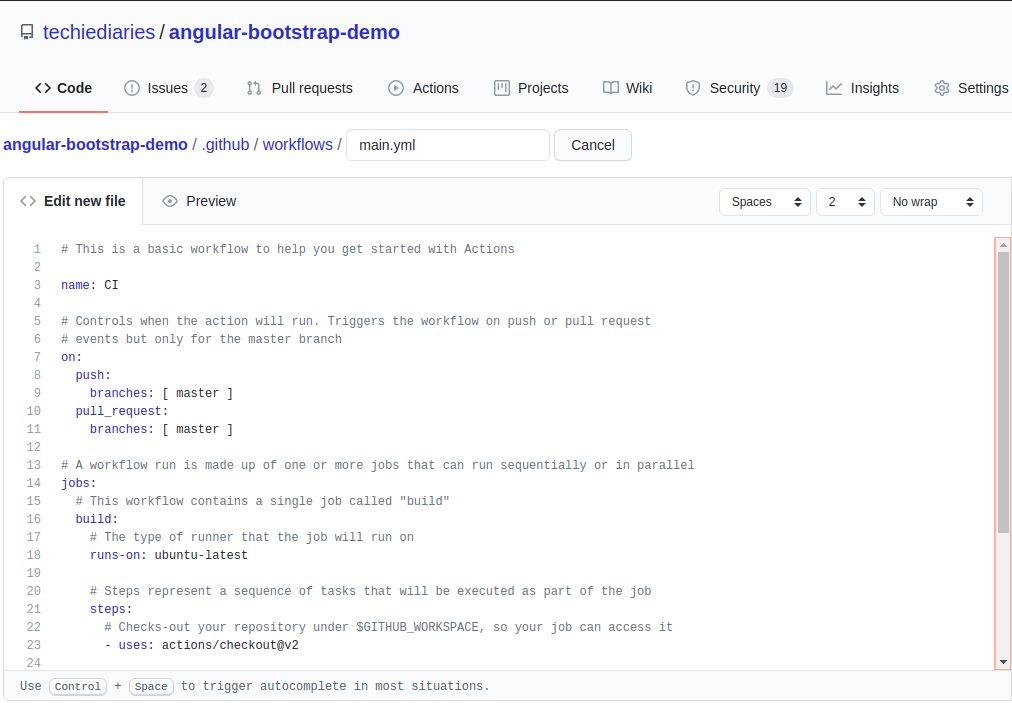 A workflow named main.yml will be created inside the .github/workflows folder of our repository with the following content:

The workflow is made up of a single job with two steps that simply print some messages on the shell of a Ubuntu runner.

A workflow run is made up of one or more jobs. Jobs run in parallel by default. To run jobs sequentially, you can define dependencies on other jobs using the jobs.<job_id>.needs keyword. Each job runs in an environment specified by runs-on.

Let's modify the previous workflow to install Node.js and Angular CLI 10 and then build our project and deploy it to the web.

We use the tsunematsu21/actions-publish-gh-pages to deploy our app to GitHub pages. This action will need an access token that needs to be generated from your GitHub account's settings page.

Jobs do not get the code of the repository by default. We'll have to instruct the job to do it using the [email protected] action. We use the following step under our build job:

Angular CLI requires Node.js so we'll need to install it in our job running Ubuntu.

For installing Node.js. we'll add another step in our job as follows:

Thanks to this, our build job is configured to use use Node.js version 12.x inside the Ubuntu runner.

Go to https://github.com/settings/tokens/new and generate a new token with the repo scope and make sure to copy it.

Next, head over to your repository' Settings tab, and next go to Secrets and create a New secret:

Name your secret ACCESS_TOKEN and paste your access token.

Step 5: Pushing and Starting your Workflow

Finally, commit your workflow file to your repo. The workflow will start automatically since it's configured to start when we push code to the repo.

Go to the Actions tab to see the state of your build workflow:

You can even visualize when the steps of the build job are running:

When completed successfully, you should have a gh-pages branch created in your repository that contains the content of the dist folder of our Angular application after being built with the previous build job.

See the app running from https://techiediaries.github.io/angular-bootstrap-demo.