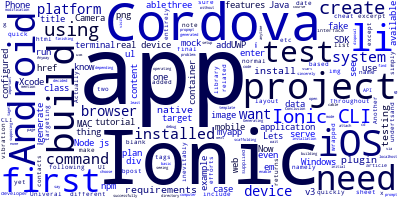 Throughout this quick tutorial ,we'll see how to create an Ionic 5 project or application using the Ionic CLI 5.

This tutorial have a few requirements which are :

Lets first make sure we can undertsand a few things .

You can create an Ionic 5 application if you just have Ionic CLI installed (and inevitably Node.js) then you can simply use the browser to serve it just like any normal web app .If you don't know it yet .An Ionic mobile app is just a web application with a mobile like UI ,wrapped by a native Cordova container .On the browser we don't even need the Cordova container .

But when do you need the other requirements ,namely Cordova ,different SDKs and systems ?

You only need them ,in two cases :

If you want to build you final app for some target platform i.e Android ,iOS or UWP or the three of them .

If you want to test your app using a real device .

But why you can't just use the browser to test the app ?

You can use the browser to test your app except if you are testing native device features or Cordova plugins such as the Camera ,vibration ,contacts list etc .In this case you need a real device so you have to install Cordova and other requirements .

You can build iOS apps only on MAC .

Actually ,you can test your Ionic 5 app entirely on the browser even if using native device features and related Cordova plugins by using plugin mocks available since Ionic Native v3.x+ but with some added efforts ,you need to create a mock or a fake class which returns fake data or developer supplied data and has the same API interface as the Ionic Native plugin you are testing .see this article for an example mock of the Camera plugin

After successfully installed Node.js and Ionic CLI 5, you can generate a new project using your terminal or command prompt .

So depending on your operating system ,open a terminal or command propmpt and enter the following command to generate a project .

That's it ,now wait for the CLI to generate a project with name myapp or any name you choose ,based on the blank template which has basic scaffolding for an Ionic project with one example Home page .

After finishing the initial setup ,you should be able to enter to your project directory and serve you app .

Now you should be able to visit your app with a web browser at http://localhost:8200

Testing your app an Android device

Lets say you decided to build to test/build your app on/for Android ,supposing you have the requirements met which are the installation of Java ,Android SDK and Cordova .

Anyway Cordova is not a problem ,you can install it anytime with one command via npm

First you need to add Cordova Android platform to your project with :

Next ,for just testing

Testing your app on iOS

Now what if you want to test your app on iOS or build it for iOS .You can do it without any code modification but you need to have a MAC system and an iOS phone device of course .

Then you can just install Cordova

Add an iOS platform to your project

One important thing to mention to be able to test your app on real device ,you need an USB cable to attach the device with your computer and you need to enable the debug mode on your device .At least for Android ,I sincerely don't know if this is the case for iOS .

For seeing all available commands at your disposal when using the Ionic CLI 5.You can find an Ionic CLI v3 command cheat sheet here

By following this tutorial ,you should have generated a project based on Ionic 5 and using the Ionic CLI 5.

If you have installed and configured taget systems requirements ,you should also be able to test your app on a real device or build your app for a target mobile system .