Update Ionic Framework CLI and Your Ionic Project to Ionic 5 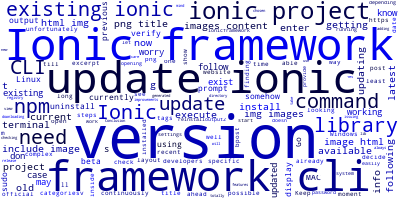 As you know the Ionic framework is continuously updated and It’s now on version 5 so developers are finding themselves all the time working with an old version, well at least this is my case. In this post, I’ll show you the way I follow to update both the Ionic CLI and Ionic library inside existing projects.

If you are looking for a one command to update Ionic, unfortunately it doesn't exist till this moment, but don’t worry the steps to follow are not complex or long and here is how you do it.

How to get your current Ionic version?

Go ahead and open your terminal under Linux or MAC or your command prompt under Windows and enter:

In my case i’m getting this output

You can also execute the following command

Which displays the current version of the Ionic CLI

So now, after getting your Ionic CLI and library versions you should be able to decide if you need to update the framework or if you have already the most recent version of Ionic.

You are not running the latest version of Ionic, don’t worry you can easily update both the CLI and the library (for projects you are currently working on) so let's start by updating the Ionic CLI.

All you need to do is opening your terminal/command prompt and enter:

If somehow that doesn’t work, you can also uninstall ionic and reinstall it:

Under Linux or MAC you may need to do sudo before your npm commands, and provide your sudo password, depending on your system and npm settings.

Now you can execute the previous commands to verify your current version.

That is it! The Ionic CLI will take care of downloading and updating the library

Getting available Ionic versions on NPM

You can also view all available versions of Ionic that exist on NPM registry using the following command:

How to install a specific version of Ionic?

Now what if you somehow need to install or use a specific version of Ionic? Is it possible to install a previous version of Ionic framework (CLI and library)? Yes, it’s totally possible. All you need to do is checking for available versions of Ionic using the command above and then install your chosen version with your terminal by issuing:

So this is how you can update your Ionic framework both the CLI and library. Keep in mind that Ionic framework is always adding new features and improvements so you need to keep your framework version updated to the latest release.