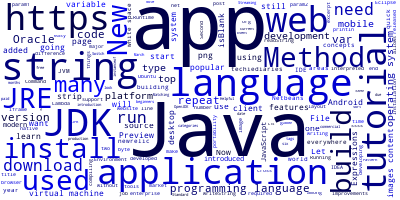 Java is one of the most popular languages for building enterprise applications and all sort of apps for web, desktop and mobile.

Java 11 is the current LTS version which has many improvements.

Note: Java 11+ Oracle JDK is paid for commercial use.

A new version is released in each six months. If you want to use it for free in production, you can You can download the OpenJDK version.

You can install Java 14 by going to this page and download JDK 14.

Java 11 has many new features. Let's see some of them:

Now, you don't have to compile the source file with javac before running it. You can run it with the java command and will be compiled behind the scenes.

You can now omit the type of your variable by using the var keyword to declare variables. In implicitly typed lambda expressions, the var keyowrd can be used for parameters:

Java 11 added support for HTTP/1.1, HTTP/2 and WebSockets in the Http client.

Java 11 added the String.repeat() method which allows you to repeat a string a specified number of times.

The following code calls the repeat() method of String to repeat the string four time:

A new isBlank() method is introduced in Java 11 which can be used to check if a string is blank or not:

JDK 11 added many useful String methods such as:

Java 11 introduced the readString() and writeString() for reading and writing from files.

Java is not JavaScript

Java has known many improvements to incorporate modern programming concepts so this tutorial will get you started with Java considering all the modern concepts introduced in Java.

The Java programming language is very used among professional programmers to build web, desktop and mobile applications. It's also the native language of the most popular mobile operating system - Android by Google.

Java was developed by Sun Microsystems and today it is owned by Oracle.

Java is not JavaScript and has nothing to do with it so pay attention they are very distinct languages.

Applications built using Java are cross platform, you can build once and run everywhere there is a Java virtual machine.

What types of applications you can build with Java?

We can build multiple types of applications using Java such as

When you want to decide if you should learn a programming language, you need to consider a few things:

So when it comes to Java language, it's one of the top three or even the first most used languages in the world for many years where it's used mainly in two development areas:

These two areas are dominated by Java language but you can also use Java for many other areas like game development.

Yes, you should! Java is still a required language and it's not going anywhere on the forseable future.

Java is ranked on the second position just after SQL for the number of jobs in 2016.

Another study from newrelic.com shows that Java is still at the top in its 20 year anniversary:

One of the strong points of Java is portability thanks to its virtual machine.

The Java virtual machine (JVM) abstracts away the differences between operating systems and allows your apps to be used with Windows, MAC and Linux without having to modify anything in the source code or to rebuild the app. Just write once and deploy everywhere and you only need to install your operating system version of JVM.

After compiling the source code, the compiler will produce an intermediary byte code language which can be interpreted by the Java Runtime Environment (JRE) so you don't worry about your application portability since the byte code can be executed by the JVM across all operating systems.

To make things easy for you, you need an Integrated Development Environment (IDE) which can make the tasks of writing, testing and debugging your code easy and quick.

There many IDEs that support Java such as Eclipse, IntelliJ IDEA and Netbeans.

Installing the JRE and JDK

You can either download the Java platform 11 or JDK 11 alone or with the NetBeans IDE.

You have noticed that the Oracle website offers downloads for both JDK and JRE so what the difference between the JDK and JRE?

JRE is a runtime which executes or run Java apps. It has to be installed on your machine so you can run apps developed with Java.

JDK is a platform which is only necessary if you are developing Java apps. It includes all the tools for compiling and building your Java apps but also the JRE.

So click on the download link for the JDK which will take you to a page that contains the versions for major operating systems .

Choose the right version for you, download it and install it!

As a wrap-up , you need a JRE to run Java apps but if you need to build apps you also need to install the JDK.

In our next tutorial, we are going to see how to install Java 11 on our Ubuntu system

Java has been around for 20+ years and still ranks on the top among the most popular and commonly used programming languages in the world. It's everywhere in cloud infrastructures, web apps, mobile apps and embedded applications.