Convert String To Number/Array In JavaScript with React Hooks/Vue.JS Examples 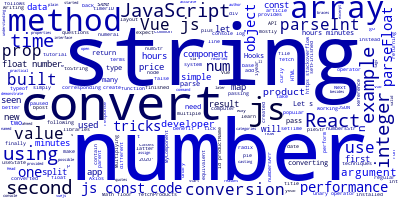 In this tutorial, we'll learn by example how to convert a string to the corresponding integer or float number or array of numbers using the built-in JavaScript methods with simple React and Vue.js examples.

We’ll first start by understanding the methods and tricks used to convert strings to integer and float numbers, or array of numbers and finally see practical examples with simple React, React Hooks and Vue.JS apps.

When passing React props to components, which expect numeral values, in the way we assign regular HTML properties i.e using the " quotes, string to number conversion is one of the possible ways we pass the accurate values besides using prop types or passing props via curly braces. We'll see that by example later in the article.

JavaScript provides two built-in methods for casting a string to a integer or float number provided that the string contains a valid integer or float. The two methods are parseInt() and parseFloat().

However, developers have resorted to use other tricks and techniques, other than the built-in techniques for performance reasons.

How To Convert String to Number In JavaScript

Let’s get started with a simple plain JavaScript example to demonstrate how to convert a JavaScript string to a number.

Head back to your command-line interface and create a file named convert.js, open it and add the following code:

Next, go back to the terminal and run the convert.js script with node if you have it installed in your development machine:

If you don't have node installed on your system, you can also use your browser to run this code. Simply go to DevTools and write the code in the console and press Enter to run it.

Number is JS object that can wrap other objects and provides many built-in methods. Don’t use the constructor i.e new Number("2020") since this will return a Number object instead of a number value.

JavaScript has a built-in parseInt() method that converts a string into a corresponding integer. It takes two arguments. The first argument is the string to convert and the second argument is the numeral base.

Go back to the convert.js file and add the following code:

The parseInt() method takes two arguments, the first argument is the string to parse to an integer and the second argument is the radix or the numeral base, if you are not familiar with this mathematical notion, simply use the ten radix to convert the number to the format used by humans for doing calculation. There are also other common bases such as 2 for the binary systems used by computers or 16 for the hexadecimal system also mostly used in computer tools.

JavaScript has another built-in method called parseFloat() that converts a string into a float number:

This method will parse the string into a float number in the base 10 numeral system.

These two methods are frequently used by developers to convert JavaScript strings to integer and float numbers which are enough for simple code examples but for complete apps, particularly those that need to benefit from each available bit of performance (and frankly which app doesn’t require better performance..), developers resort to other tricks with some JS operators which weren't designed for the first place for type conversion.

Convert a String to Number Using the + Unary Operator

You can also make use of the unary operator or + before a string to convert it to a number but the string should only contain number characters. For example:

As you see when using the unary plus operator with a JS string, the result is a number.

Just like the + unary operator, the built-in Math.floor() can be used to convert a string to an integer. For example:

Unlike the plus unary operator, if you pass a float number, it will be converted to an integer so use it only when this is the desired behavior.

Using * 1, Multiplying by One

You can also multiply a string by one to convert it into a number. This is has also the benefit of being one of the fastest methods in JavaScript. It's similar to the + unary operator, as it doesn't perform conversion to an integer if the number is a float.

There are also many other methods to convert a string to number in JavaScript such as:

Many developers prefer to use the Number object, without the the new keyword (which creates a new JavaScript object instead of returning a value)

This works for floats as well.

All these methods are used by developers but each one is different in terms of performance on different environments, depending on the implementation.

Generally speaking * 1 is reported by many developers as the best for performance. the winner performance-wise 10x faster than other alternatives.

Converting a JavaScript String to Array of Numbers

Let’s now see a little advanced example by converting a JS array of strings into numbers using one of the previous methods.

How to convert this string into a JS array of the corresponding numbers?

First, we need to call the string into an array of multiple strings using the comma as the separator:

The result will be:

Next, we can iterate over this array and convert each string to a number:

We can also create a more compact code as follows:

The string is converted to an array, then using the JS Array.map method, we map each value with an arrow function returning the integer equivalent of the string.

For increasing performance and writing a shorter code, we can convert the string to number using the other conversion tricks such as the unary plus operator:

We can also use the Array.from method as follows:

The Array.from() method creates a new, shallow-copied Array instance from an array-like or iterable object.

The first argument is a JS array created by splitting the original string to an array of strings and the second argument is a map function that will applied to each element of the array, converting it to a number by wrapping it with Number, resulting in a new array of numbers.

The second line is simply short for:

Now that we have seen how to perform string to number conversions in JS, let’s see how to apply that concrete cases when working with popular JS libraries such as React or Vue.JS

Let’s assume we have the following JSON data that will be returned from a REST API:

In our Vue.js or React app, we can fetch and consume these JSON data from our remote server using the Fetch API or an HTTP client like Axios. We want then to convert the product prices to numbers from strings.

Here is our JavaScript function:

This is the Vue.js app:

Passing Props as Strings Instead of Numbers: React Hooks Example with JS parseInt and parseFloat Methods

When working with React, you'll mostly need to pass props to components which can be done in multiple ways. For example, using the regular HTML way i.e:

This will pass the value prop as a string not a number even if we mean to use the latter type because what the component would expect.

There is multiple solutions for this. If you need the prop value as a number, you simply need to use the string to number conversion tricks and APIs we've seen in the article such as parseInt().

You can also use curly brackets when passing the prop :

You can also make use of React Prop Types to define what data type of a property in a React component should be.

This is a simple React component with hooks that converts the string props, that would be passed to it from a parent component, into numbers before working with their values:

This React component expects the hours, minutes and seconds props which should be numbers so it might be a good idea to parse these props to numbers regardless how the parent pass these values.

In this article, we've seen how we can convert strings to numbers in JavaScript which is common operation whey you are writing JS code.

We have seen that JavaScript provides many tricks and built-in APIs for converting a number into its equivalent string such as the built-in parseInt and parseFloat methods, and also multiplying, dividing by one or using the unary plus operator before the string variable.

Most developers find that the latter tricks are better in terms of performance than the built-in parseInt and parseFloat methods.

We've also seen an example of converting a string into an array of numbers using the conversion tricks with JS methods like Array.map, Array.from and split.

Finally, we have seen how to use string to number conversion with real-world cases when building apps with popular JavaScript libraries like React (React Hooks) and Vue.js.

How to download a file in JavaScript JavaScript Blobs and object URLs Use JavaScript's Object.entries() for iterating over an object's properties How to get current time zone in JavaScript How to add days to dates in JavaScript Convert String To Number/Array In JavaScript with React Hooks/Vue.JS Examples JavaScript/Node Top-lavel Await Example [TIP] $(document).ready() vs window.onload() vs $(window).load() [TIP] Pure JavaScript equivalent or alternative to jquery.ready()