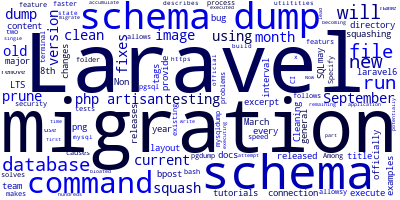 Among the new featurs of Laravel is a new schema:dump command which allowsy you to remove old migrations and speed up the testing and CI process.

You can run the command from your terminal as follows:

The schema:dump command makes use of the mysqldump or pgdump utiltities to dump the current state of your schema to a database/schema/{connection}-schema.mysql file.

This how the official docs describes this command: