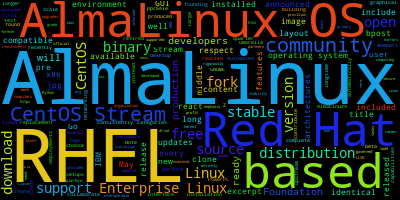 During the first quarter of 2021, Red Hat announced that it would no longer support CentOS and instead use it as a beta version of RHEL.

AlmaLinux 9 is a CentOS Stream-based RHEL 9 clone. CentOS Stream is the replacement for CentOS, a longtime RHEL clone that was recently retired.

AlmaLinux OS is 100% binary compatible with pre-Stream CentOS and RHEL®.

Note: CentOS Stream is a Linux® distribution in which open-source community members can collaborate with Red Hat developers to create, test, and contribute to a consistently produced upstream distribution of Red Hat Enterprise Linux.

Since its founding, this distribution has been under the umbrella of the AlmaLinux OS Foundation.

AlmaLinux OS is a binary fork of RHEL and CentOS Stream that is identical in every respect. As of the middle of May, AlmaLinux 9, which is based on Red Hat Enterprise Linux 9, is available for download.

Does AlmaLinux have a GUI?

GNOME is the desktop environment that is pre-installed on AlmaLinux; however, this is only the case if you choose to perform a complete installation of the operating system. In other setups, a graphical user interface (GUI) is not automatically included.

AlmaLinux9 includes all of the capabilities found in RHEL 9. The version is not only compatible with x86 architectures, but also with IBM's PowerPC ppc64le and IBM Z s390x.

Automated and large-scale deployments, as well as cloud networking upgrades based on a Linux 5.14 LTS kernel, are new features in AlmaLinux 9.

For developers, GCC 11, Python 3.9, and the most recent releases of the LLVM, Rust, and Go compilers are all included in AlmaLinux 9.

What is AlmaLinux based on?

AlmaLinux OS is a free operating system that is developed by the community and is open-source. It is based on the Red Hat Enterprise Linux source code (RHEL). AlmaLinux is a fork of RHEL 8 that is entirely binary interoperable, and it is maintained by the AlmaLinux OS Foundation, which is a non-profit organization.

AlmaLinux OS Foundation announced that AlmaLinux OS 9 is stable and downloadable. This production-ready stable release for x86, 64 and ARM architectures is ready to drive all of your computing requirements and tasks and is ready to be installed in production environments.

How long will AlmaLinux be supported?

Support for AlmaLinux OS will be provided until at least 2029. This support will include secure updates that have been rigorously examined as well as stable updates.

AlmaLinux is an open-source, community-owned and -governed, forever-free enterprise Linux distribution with a primary emphasis on long-term stability and the provision of a powerful platform for production-grade work.

Users need to be informed that Red Hat and its partners do not support AlmaLinux 9.