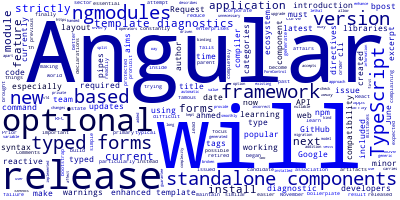 Google's Angular is a TypeScript-based web framework that is especially popular in the corporate sector. Angular 14 will have standalone components with optional ngmodules, typed reactive forms, and better template diagnostics.

Angular 13 was released in November, after which the team began working on the Angular 14 release. Typed forms, enhanced template diagnostics, and standalone components, with optional NgModules, are the most essential features.

The next important version to Google's TypeScript-based web framework is Angular 14.

In the past, new developers have been constantly complaining about the learning of TypeScript curve of Angular and that learning Angular is more difficult than other frameworks such as React.

With th release of Angular 14, the team seems trying to make things easier to learn especially with the introduction of standalone components which aims to make ngmodules optional and by result reduce boilerplate code required to bootstrap a simple Angular application.

What is the release date of Angular 14

How to install Angular 14

At this time, Angular 14 could be installed via npm using the next flag.

Simply open a new command line interface and run the following command to install the latest version of Angular:

This will install the latest version of Angular CLI globally on your development machine.

Type safety while retaining API compatibility, permitting progressive typing to enable the usage of typed and non-typed forms, and implementing updates without impacting current applications and libraries are all preliminary objectives of this latest release.

An RC0 version of Angular 14 is now accessible on GitHub with the following improvements:

Angular 14 new features ensure that developers are safeguarded from a variety of errors. For example, minor problems in the angular template syntax will be flagged using the extended diagnostics.