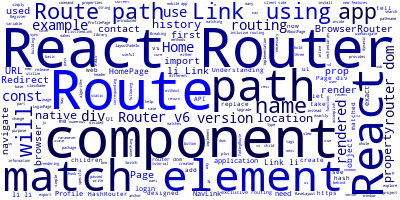 The purpose of this guide is to get you up and running with react-router-dom v6 (also known as React Router 6) by demonstrating how to use various concepts such as Link and NavLink for establishing links instead of anchors, Routes for enabling exclusive routing, and browser routing history.

We'll also explore how we can use React Router 6 to implement client-side routing for our project.

Version 6 of React Router adds a slew of useful new features and improves compatibility with React's most recent releases. Breaking changes from version 5 are also introduced in this release. Upgrade your app from version v4 or v5 all the way to version 6 with the help of this tutorial.

React Router 6 is the most recent version of the official routing library for the React 18. It is necessary to have client-side routing when developing Single Page Applications (SPAs) so that users may browse across the UI of your React 18application, which is often divided into numerous pages or views.

Using the new router principles in a basic multiple-page React app may be the best approach to explore how the new router works. Our sample app will have a home, about, contact, login, registration, and profile component/page. Let us first have a look at React Router v6 fundamentals.

Numerous modifications have been made behind the scenes in React router 6, including a more powerful route pattern matching algorithm and additional components. Furthermore, the package size has decreased by about 58%.

React Router-dom does not export Switch in v6. We used to be able to wrap our routes with Switch in an older version. Instead of using Switch, we now utilize Routes to accomplish the same goal.

You can't write the component that should be displayed on matching an url in the Route component's children; you have to supply it a property named element in order to have it rendered.

React Router just got a whole lot better with version 6. We can now match a certain route to a prop without needing the exact property thanks to the improved route matching algorithm.

This is an example of React router 6:

You can also use routes as objects using the following syntax without using the separate react-router-config library which was required in v5:

The useNavigate hook has been added to React Router v6 to replace the useHistory hook:

Redirect was removed from react-router-dom. Rather of relying on Redirect, we now utilize Navigate to accomplish the same purposes:

Since we are building a web application not a native mobile app we need to install react-router-dom package, so inside your React project run the following command using your terminal (Linux or MAC) or command prompt (Windows):

The < Route > component is one of the most useful components of React Router v6 and the idea behind it is simple, wherever you want to render something when only there is a match with the location's path you can use a Route component.

The Route component takes many properties such as:

There are two other properties which can replace the component property to tell the Route component what it needs to render when there is a match:

Most of the times, you will use component propery but there are also many situations when you'll have to use either render or children properties instead. Thre three methods will be passed these three props:

Usually there are variable parts of the pathname used to pass information between diffrent routes of an application so how do we capture these variables and pass them to components? We can just append the name to be used for the variable plus a colon : to the end of the route's path, for example:

When there is a path match an object which has the following properties will be created and passed to the component:

Links are React Router v6 components designed as a replacment of anchor links to create navigation elements which enable users to navigate between differenet pages of React apps. Unlike anchors ,which reloads the whole page, Links only reload the portion(s) of the UI that match(s) the browser's location path.

A Link component takes a to property which tells React Router the destination to navigate to. For example:

When clicked will take us to location with path: /

the to prop can either take a string or a location (pathname, hash, search, and state) object, for example:

Link can take also another property: replace if True, when clicked the link entry will be replaced in the history.

NavLink is a subclass of Link which adds styling information to the rendered element(s), for example:

Now let's write an example React app which shows you how to use BrowserRouter to implement routing.

Next we create the base layout component, besides common HTML tags we also use React Router v6 components Link and Route:

Next we create our pages:

And finally we create the App component which BrowserRouter component to hold our base layout component then render the app.

As you can see, it's very easy to use the React Router v6 components to create apps with routing.

That's because React Router v6 uses inclusive routing instead of exclusive routing used by React Router v3 so without exact property the home component will be rendered with all other components, for example when the user visits /login path both / and /login paths will be matched and their corresponding components LoginPage and HomePage will be rendered. But that's not the behavior we are looking for, that's why we need to add the exact prop which tells the Route component to match exactly the / path.

See how to set state and use context api in React.

Now let's see how we can use inclusive routing in our advantage, lets suppose we have a sub-menu component that needs to be available only when we are on the profile page We can easily change our basic layout to add this requirment:

So as you can see all Routes with path '/me' will be rendered when we visit '/me' path not just the first match, that's inclusive routing.

You can also navigate inside your React application using methods from the history object, for example:

Which are equivalent to:

How to Redirect with Redirect Component

Whenever you want to redirect to another location, you can place component which is when rendered will redirect to the location specified in to prop that can either be a string or a location object, for example:

React Router v6 makes it dead easy to create React apps with complex UIs that has routing between different portions, you can simply declare a Router component such as BrowserRouter or HashRouter and put,inside of that, a bunch of child Routes components that has props which indicate the path to be matched and the element to be rendered inclusively whenever there is a match (i.e all matched Routes will be rendered). In case you need to do exclusive rendering (Just like React Router v3: i.e only the first matched Route will rendered) then you can simply use a Routes component where only one child (the first found) will be rendered. You can also pass different information between routes using parameters that can be captured and retrieved from the match object which gets created once a match is established and then passed to the current rendered component. Finally all building blocks or components of React Router v6 designed for web apps routing are available and can be imported from react-router-dom.