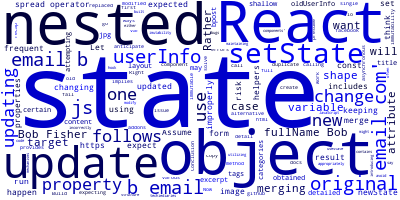 When using setState with a nested object and attempting to update just certain attributes of the state object, an expected state may be obtained, as will be detailed below.

Because React only uses shallow state merging, the result isn't what you'd anticipate.

When you update your state improperly, you run the risk of changing its original shape, which is frequent. Assume your state variable includes a nested object, and you want to change one of the nested object's properties. You'd think React would update the target property while keeping the original state's form, but that's not the case.

This should work, but there is an alternative! Let's go through this in more detail first.

In React, the state is immutable which implies that if you use this state in your component:

Updating the state as follows will fail with errors:

Rather than updating the state as above, React provides the setState() method to do an asynchronous update as follows:

To solve this issue, you can use varous ways:

You can also create a new state object from the old state using the spread operator and set it as the new state as follows:

As a recap, incorrectly updating your state might result in a change in its original structure. This happens often. Let's say you have a state variable that contains a nested object, and you want to modify one of the attributes of the nested object. You'd expect React to update the target property while maintaining the original state's shape, but that's not the case at all.

Your React components' nested state has to be updated appropriately, either by utilizing imutability helpers or JavaScript built-in mechanisms like the spread operator, to avoid introducing bugs into your code.