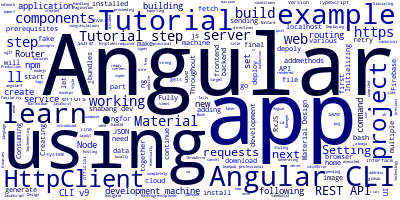 We'll learn to generate components and services using Angular CLI and depoly your final app to the cloud (Firebase).

This is what you'll learn by following this tutorial:

These are the steps of this tutorial:

The tutorial is divided into the following parts:

As always let's start with the prerequisites!

Note: you can download our Angular 8 Book: Build your first web apps with Angular 8 for free.

What are the Prerequisites of this Tutorial?

Before proceeding with this tutorial, you'll need to make sure you have the following prerequisites:

If you have the prerequisites, let's go ahead and dive into the steps to build an Angular 9 application that fetches data from a REST API server using Angular HttpClient and display them using Material Design.

In this step, we'll set up Angular CLI v9 in our development machine.

Angular CLI is built on top of Node.js so as mentionned before make sure you have it installed on your machine together with npm.

Angular CLI is the official tool for initializing and working with Angular projects.

Open a new command-line interface and run the following command:

At the time of writing this tutorial, angular/cli v9.0.0 gets installed on our development machine.

If you manage to get this step working, congratulations, you are ready for the next step.

In this step, we’ll create a new Angular 9 with Angular CLI.

Head back to your command-line interface and run the following commands:

Angular CLI will set up a fully-working project with the necessary files and dependencies. No need to do complex configurations by yourself! All you need is to focus on your specific project requirements.

Your web application will be available from the http://localhost:4200/ address.

Go to web browser and navigate to the http://localhost:4200/ address to start playing with your web app.

If you are able to get your Angular app running in a web browser without any errors, congratulations you are ready for the next step.

In these first two steps of our tutorial, we have seen the prerequisites needed for building our example app with Angular 9 such as the knowledge of TypeScript, Node.js and NPM installed on your development machine. Next, we have installed Angular CLI v9 from npm in our machine using the npm install @angular/cli@next command, initialized a new project and served it locally using a live-reload development server.

In the next step(s), we'll continue buiding our example app by setting up HttpClient