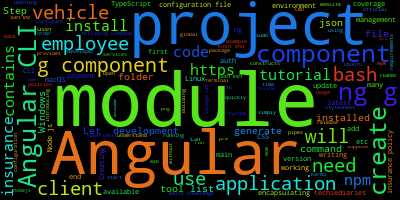 Angular CLI is a powerful tool available for Angular developers. In this tutorial, you'll be learning how to install and use Angular CLI 9 (the latest pre-release version as of this writing) on Windows 10, Linux and macOS to create Angular applications and various constructs like modules, services, components and pipes etc.

Angular CLI is a tool developed by the Angular team to enable developers to quickly create Angular projects without wasting time setting up complex build tools like Webpack. It's the official tool for Angular development and it's buit on top of Node.js and can be installed from NPM.

As the time of this writing Angular CLI 14 is the latest pre-release version.

As an example, we suppose we'll be building a car insurance front-end web application.

In order to follow this tutorial, you'll need to have a development environment ready for front-end development with Angular.

In nutshell, you need to have:

In this tutorial, we assume you are working with a bash terminal. If that's not the case you can simply use the equivalent commands in Windows Command Prompt or Powershell.

You can check the available version of Node.js in your system using:

How to install Angular CLI 14 on Windows, Linux and Mac?

In this section, you'll start by installing the Angular CLI 14 which is, as we mentionned before, the latest prerelease version as of this writing.

Open your terminal and run the following command:

As the time of writing this tutorial @angular/cli v14.0.0` will be installed.

This step assumes you've installed Node.js and npm in your system.

In Debian-based system and macOS, you may need to add sudo to your command in order to install your package globally. This depends on your npm configuration so make sure you either configure npm properly or simply add sudo. On Windows, you'll need to open CMD or Powershell with administrator privileges

You can quickly see all the available commands that you can use with the CLI by running the following command: 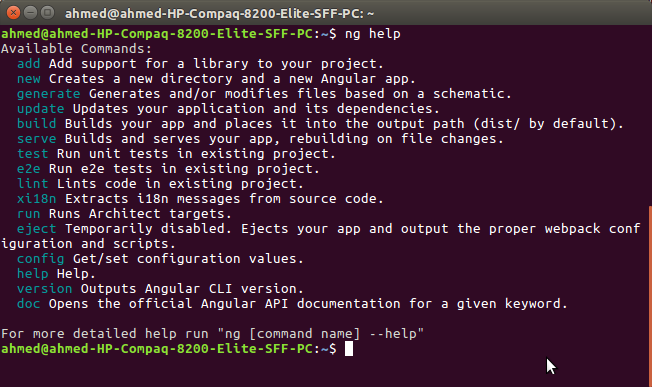 Now that you've installed the CLI, you can generate an Angular 14 project but first let's introduce the application we'll be building and the requirements we'll be implementing in this tutorial series.

Let's suppose we are tasked with building a car insurance web application (just the front-end, the back-end will be built by the back-end developer).

It provides a CRUD interface for handling operations to create, get, update and delete data that can be categorized into the following categories:

Let's see how we can use Angular CLI 14 to quickly bootstrap our project.

Now that you have Angular CLI installed and you understand what web application you are going to develop. You need to generate a project by running the following command:

This will set up routing in our project and set CSS as the stylesheets format for components.

Wait for the CLI to generate the project structure and install the dependencies.

Angular CLI provides a development server that you can use to serve your projects locally when your developing them with many features like live code reloading which allows you to change your code and see the results without manually re-starting the development server to reloading the application in the browser.

To start the develoment server and serve your project,  you simply need to use the serve command.

First, navigate into your project's root folder and run the serve command:

The development server will be available from the localhost:4200 address.

Before you start adding any code to your project, let's first understand the project's anatomy. These are the files and folders contained in the project:

You can configure many aspects of your project from the angular.json file. And most of the work you will do will be in the src/app folder that contains the actual code of your application.

You can also define any environment variables inside the src/environments folder.

You can divide the project into multiple Angular modules for better organization and maintenance. These are the modules that you can create according to the functionalities that you need to handle in your application:

That's it. After creating the modules, you will next create the components for your project.

A component is a TypeScript class decorated with the @Component decorator. It controls a part of application screen. You can read more information about components from this tutorial.

In this example, you need to create many components in each module. Let's generate the first component:

policy-list is the name we've given to the component that displays the list of policies. You can, also just use g instead of generate.

We are prefixing the name of the component with the module name, i.e insurance/policy-list so the CLI will add the component to the insurance module instead of the main module.

You also need to generate the other components of the application, such as:

These are all the components that we need in our application. Each component is added to its own module.

In this tutorial, we've learned to use Angular CLI 14 to create an example vehicle insurance project with features like modules and components.