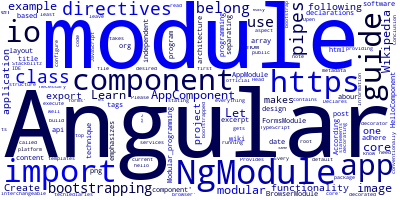 Angular projects adhere to a modular and component-based architecture.

Modular programming is a software design technique that emphasizes separating the functionality of a program into independent, interchangeable modules, such that each contains everything necessary to execute only one aspect of the desired functionality.

How to Create Angular Modules

Angular makes it easy to create modules by providing *[NgModules**](https://angular.io/guide/ngmodules):*

A NgModule is a TypeScript class decorated with the @NgModule decorator which takes a few metadata that does the following:

Please note that Angular modules are not JavaScript modules.

Every Angular app has at least one module, conventionally called the root module. This is the module that gets bootstrapped for running the application.

Head over to your Angular 10 project in the Stackblitz IDE. Open the src/app/app.module.ts file, you should see the following code:

At the top, we have some import statements. NgModule belongs to the @angular/core package.

After the imports, we configure the module by decorating the AppModule class with @[NgModule](https://angular.io/api/core/NgModule) and stating what components and directives belong to it (In the declarations array) as well as which other modules it uses (In the imports array). For more information on the structure of an @[NgModule](https://angular.io/api/core/NgModule), you can read Bootstrapping from the official Angular guide.

There is more that you should know about modules but let's leave that to after you build your first app.