Building Server Side Rendered Apps with the Angular Universal Starter 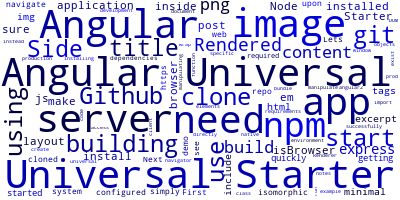 Angular Universal Starter is a minimal starter for quickly getting started with an isomorphic Angular 2+ web application. You can simply clone it from Github and start building your universal Angular app upon it. Lets see how to do that.

First you need to have Git installed on your system. You need also to have Node.js and NPM installed and configured.

Next clone the Universal Starter from Github with:

Then navigate inside the cloned repo and install the required dependencies with:

After successfully installing all requirements you can start the development server using:

After building your application you can create a production bundle using:

## Some notes when using Angular Universal

You shouldn't use the browser specific objects such as window, document, navigator because they only exist on browser environment and since Angular Universal uses a Node.js express server you can't access them.But what you need to do if you need to manipulate the DOM for example?

Make sure to use Angular Renderer class instead of manipulating native elements directly.