What is an Angular 10 Workspace? 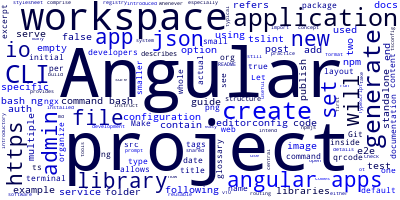 An Angular workspace allows you to organize your whole web application into smaller and multiple projects. Most small Angular apps will only contain one or two projects per workspace. For example, when you generate an Angular 10 project with Angular CLI, the workspace contains a project for the actual app and a project for e2e tests.

The Angular docs describes a project as:

A set of files that comprise a standalone app, a library, or a set of end-to-end (e2e) tests.

You can create two types of projects: Application or Library.

Just like the typical concept of a library in software development, a library refers to a set of reusable code that can be shared between many projects. Angular CLI v10 also makes it easy to publish your library to a central registry like npm to be used by other developers.

Workspaces are first introduced in Angular 6.

Angular CLI 7+ provides a new CLI option (--create-application) that you can add to your ng new command to create an empty workspace. This is especially useful if you only intend to create a library that you can import in other projects ot publish for other developers.

Let's now see this in practice!

Make sure you have Angular CLI 10 installed on your system then open your terminal and run the following command:

But will only generate these files:

The CLI will also install the Angular 10 dependencies into a node_modules folder.

Head back to your terminal, navigate in your Angular 10 workspace:

Next, generate an app/project using the following command:

This will generate two projects, admin and admin-e2e (for end to end tests) into a projects folder.

You can also generate libraries in your workspace using this command:

ngx-qrcode is the name of the library. It will be also added inside the projects folder just like the other applications.

After generating multiple applications with no default application for your workspace, you can generate modules, service, components and other artifacts into specific projects using the --project option.

Let's for example generate a service inside the admin project:

Serving Specific Apps in Your Workspace

You can serve a specific application in your workspace using the following command:

Where admin is the name of the application that you want to serve.

In this quick post, we've seen what is an Angular Workspace and how to create an empty workspace with an Angular 10 example, then how to add applications and libraries in the Workspace.