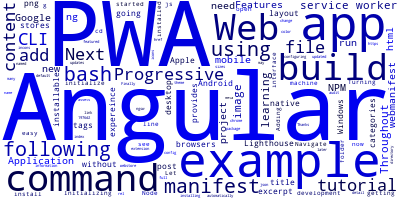 Throughout this tutorial, we'll be learning to build an Angular 9 PWA (Progressive Web Application).

A PWA provides a native-mobile-like expereince for web apps.

PWAs can be installable in your mobile and desktop web browsers without going through app stores for Windows, Android or Apple.

Initializing a PWA with Angular 9 CLI

Let's now see how to build our Angular 9 PWA by example.

We need to have Node,js and NPM installed on our development machine before getting started.

Next, open a command-line interface and run the following command:

Next, initialize a new Angular 9 project using the following command:

Adding PWA Features to your App

Turning your Angular 9 app to a PWA is very easy using Angular CLI.

Navigate in your project's folder using the following commands:

Next, run the following command to automatically add PWA features:

The index.html file is also updated with the following content:

Thanks to these updates, your Angular 9 app is a full-featured PWA.

Finally, you need to audit your PWA using Google's Lighthouse by installing the extension.

We have seen by example how build an Angular 9 PWA with an example.