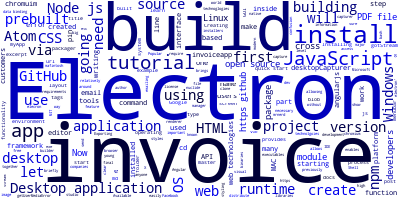 In this tutorial, we will learn to build desktop applications with Electron and web technologies i.e HTML, CSS and JavaScript.

Electron is a Javascript runtime environment based on Node.js and chromuim which enables developers to build Desktop applications with web technolgoies i.e Javascript,CSS and HTML.

Electron is a web application runtime built on Node.js and the open source Google project Chromuim,which brings web technoglogies to the Desktop allowing developers to build Desktop applications for major operating systems such as Windows,MAC and Linux ,using JavaScript ,HTML and CSS.

Let's clear some confusion about Electron so what Electron is and what it is not?

What Electron is not?

Create an electron application inside a folder for example myApp

In this tutorial we are going to build an invoice application with Electron which allows users to create invoices, and then export them as PDF files or send them to customers via email. I'm going to show you how to create a Desktop application with modern web technologies such as Angular.js using the awesome GitHub project Electron. With the Electron project web developers can use their web development skills with JavaScript ,CSS and HTML to build cross platform applications for Windows,Linux and MAC .The final source files of this tutorial will be hosted in GitHub under the MIT license and you will also be able to download and use the compiled app(Available for both Windows and Linux).

Before starting lets talk briefly about the tools and frameworks we are going to use in this tutorial:

As I said before Electron was created by GitHub for its Atom editor .It is an open source project which provides a runtime environment so anyone which can build a website can build a Desktop application without using the old classical tools such as Java or C++.Electron is based on Node.js and the chromuim open source project.When writing this tutorial Electron version is 1.1.3 which has many improvements over previous versions.

A client side Javascript framework which follows the Model View Controller (MVC) architectural pattern .It is created by Google and has a great open source community around it,it's used by many JavaScript developers around the world.

The first step is to get the necessary information from users.Things such as the name,address,company,logo and items which need to be invoiced.

Exporting and saving the invoice as a PDF file.

Sending the invoice via email to customers.

Email is one of the most used and important online communication tools.So Adding the invoice emailing feature to our application makes it more professionnal.With one click of a button,application users can send the final generated invoice as a PDF file to their customers via email.

Before beginning the development process you need to make sure you have everything installed,starting with the principal platform Node.js and then the necessary modules you need to have to work with Electron itself and the required packages for specific functionality such as working with PDF files and emailing.

I'm not going to show you how to install Node.js here so if you haven't installed it yet you can easily find any tutorial on the web to do that ,I recommend you to install it via NVM manager which allows you to install and switch between many versions of Node.js without any conflict.

After you have installed the Node.js platform lets proceed to installing Electron,you can install it easily,typing one command,via the NPM package manager so just execute the following line in your CLI:

This will install Electron globally ,you can also choose to install it locally per project.

So first create a Node.js module :

this will install elecron-prebuilt as a dev dependency package

Please make sure you have the latest version of Node.js( version 6.2.0 when writing this tutorial) for this to work successfully .

Running the app in this point gives you a basic desktop application with a hello world sentence.Now we need to build our actual invoice app .The first step is writing the HTML code for our app interface and then styling the app using CSS.

Building and styling the interface

To not reinvent the wheel,we are going to use a responsive html invoice template by Jonathan Neal, available on via this link under the MIT license and then tweak it to satisfy our needs.

So that's the first part of our tutorial .In this part we have talked briefly about the Desktop application we are going to build ,the requirements we need to develop and we have taken the first step of building our project.The next part is about creating the application's splash or welcome screen and then building the Angularjs based app.