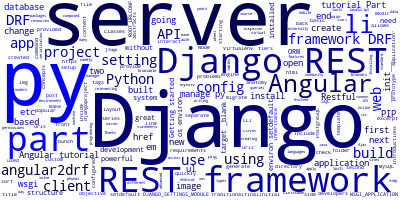 This is the first part of a tutorial series about getting started with Django framework and Angular 4|5.

The final objective is to create a restful web application which has two separate parts. The first part is the back end which is created with Django and the Django REST framework, the second part is the front end which is built using Angular 2+ framework.

Before starting, this tutorial has a bunch of development requirements:

Objectives of the part 1

In the first part of these tutorial series, we are going to cover basic introductions to the two server side used frameworks Django and DRF, and their initial setup.

Getting started with Django and DRF

Django is a web framework based on Python which allows developers to quickly prototype and build web applications. It has a powerful ORM that abstracts how you can interact with popular SQL based database systems such as MySQL and PostgreSQL. Django has also a powerful template engine with powerful concepts such as tags and inheritance etc. Developers can also use built in and community provided packages to quickly solve common web development problems without reinventing the wheel.

Django was created many years ago to build traditional web sites or applications but since then, the web has evolved with other types of modern apps such as Rest based applications. These apps expose a set of Restful APIs that provide a standard way to interact or consume resources across different clients such as browsers and mobile phones etc. Thanks to Django and Django Rest Framework (DRF) you can build Restful APIs with a great ease using the great features provided with Django and DRF such as, the great ORM, the browsable APIs, serialization, auth and permissions classes etc.

Unlike traditional web apps, REST based apps are composed of two major tiers, namely the server and the client parts. You can use Django ORM to build a sort of a database manager of your server machine without writing any SQL statements but only Python classes to create database tables and apply all sort of queries against your database. The next step is to use DRF to build the Rest API to expose your app data externally so other clients can consume it. The clients can be built using JavaScript and Ajax or using advanced frameworks such as Angular which we are going to use in this tutorial. You can also use other programming languages and tools to build API clients such as Java for Android apps or Swift for iOS apps etc.

Installing Django and Setting up a new project

You can install Django and then generate a new project in a matter of a few commands so open your command line.

Start by creating a new virtual environment with:

Then use PIP to install Django and DRF with:

Now we can generate a new Django project using:

Django provides us with a simple directory or project structure

Which is quite good for most cases but not for us since we have two tiers, the server and the client, so we need to customize it to meet our requirements.

So create two folders inside the project directory, for client and server

Then move all files to server, you should get a structure similar to:

Also add an __init__.py file inside the server folder to make it a Python module.

You can also change angular2drf name to something more meaningfull like config but you need to make some changes:

Then open server/manage.py then change the 6th line to

Next open server/config/settings.py and change

Next open server/config/wsgi.py and change

If there is no error, you should be able to migrate your db and run the server without any problems

So that is all for this part, in the next part we are going to continue with our tutorial. Basically we are going to see how to create database models, configure DRF and create our Restful APIs.