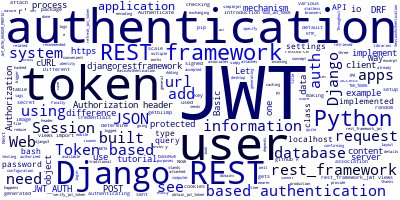 Adding JWT authentication in Python and Django is quite easy thanks to some mature libraries and packages like Django REST framework, djangorestframework-jwt and django-rest-framework-simplejwt.

JWT stands for JSON Web Tokens and it's a mechanism for exchanging data between computer systems that happens to be convenient for generating authorization headers that can be used to implement statless auth in web apps.

Authentication is simpy the process of confirming the identity of users. There is also a related concept which is authorization — the process of making checking if the user has an authorized access to a protected server resource.

Throughout this tutorial, we are going to see the various ways that you can use to implement authentication in Django REST framework.

Finally, we'll see how you can add JWT authentication in your web apps built with Python, Django and Django REST framework.

The general process of authenticating users is done by checking if any user information or credentials are attached to an incoming request sent from the client.

DRF has already three mechanisms to authenticate users. Let's look at each one of them:

Let' see of all of them in more details

Basic authentication is very easy to setup but it's only recommended for testing purposes not for production.

It's implemented in rest_framework.authentication.BasicAuthentication class and works by base64 encoding the user login information i.e the user's name and the password then attach them to an HTTP Authorization Header (which can then be retrieved from request.META.HTTP_ AUTHORIZATION).

This type of authentication depends on cookies on the client to store the user session information once the user is logged in on the server.

Cookies are not available in mobile and desktop apps and they are not accepted by browsers in the case of cross domains apps.

Token based authentication uses a token, which is a hashed (base64) set of information, that gets generated and sent to the client when the user logs in.

Each time the user sends a request, it attaches the token as an Authorization header.

Django REST framework associates users and generated tokens in a database table so it needs to query the database for every request to determine the association between a token and a user.

You can reduce database access by caching the token but this doesn't scale well when the application gets bigger.

What is JSON Web Token?

Now let's understand JSON Wen Tokens. This is the defintion of JWT

JSON Web Token (JWT) is an open standard (RFC 7519) that defines a compact and self-contained way for securely >transmitting information between parties as a JSON object. This information can be verified and trusted because it >is digitally signed. JWTs can be signed using a secret (with the HMAC algorithm) or a public/private key pair >using RSA.--https://jwt.io/introduction/

What is the difference between Django REST framework built-in token-based authentication and JSON Web Tokens or JWT authentication?

There is no way you can determine a user from the token itself since it's purely random unless you query the database.

JWT is JSON data encoded using a secret key so the server doesn't need to query a database. It can retrieve the associated user from the token itself.

As a result, it's more efficient and scales better than DRF's built-in token system.

So now that we have seen the differences between JWT and DRF built-in token-based authentication systems, how can we implement JWT authentication in your apps built using Python, Django and Django REST framework?

Unfortunately, Django REST framework has no built in JWT authentication system, but we can very easily add it to our project using the django-rest-framework-jwt package which can be installed from PyPI using pip.

Next you need to add: rest_framework_jwt.authentication.JSONWebTokenAuthentication to DEFAULT_AUTHENTICATION_CLASSES in the REST_FRAMEWORK configuration object in your project' settings.py file:

You can also customize various settings for djangorestframework-jwt using the JWT_AUTH object. For example:

Next you need to add the different URLs for working with JWT in the urls.py file:

You can obtain a token by sending a POST request with the user's name and password to the http://localhost:8000/jwt-auth/ endpoint. Let's see an example using cURL:

Please note that you need to provide the credentials for an existing registered user.

For every request to a protected API resource you need to attach the obtained token to requests, with an HTTP Authorization header, in the form of:

Th prefix is 'JWT' by default but if you have specified another using the JWT_AUTH configuration object:

You need to specify that one instead:

Using cURL you can specify an Authorization header with:

If you can get the protected information then congratulations you have successfully setup JWT within your Python web application built with Django and Django REST framework.

In this tutorial, you've learned about JWT auth in Python and Django. You also have seen a simple example to implement JWT in Django REST framework apps.