Building a CRUD Application with Django Rest Framework and Vue.js 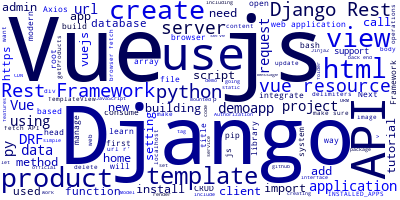 In this tutorial, you will learn how to use Django and Vue.js to build a modern CRUD (Create, read, update and delete operations are essential for the majority of web applications) web application. You'll also learn how to integrate Django Rest Framework with Vue.js and how to make HTTP calls using vue-resource (you can also use Axios or the browser's fetch API).

In nutshell, Django is a back-end framework for building web applications with Python. Vue.js is a user interface library for creating JavaScript applications in the front-end. Django Rest Framework is a Django module to create Rest-based APIs that can be then consumed from browsers or mobile devices.

You can use any database management system such as MySQL or PostgreSQL etc. Since the Django ORM can abstracts away all the differences between database systems and let work with any database without writing new code.

The integration part simply consists of using an HTTP client like Axios, vue-resource or even better the browser's fetch API to call APIs exposed by DRF from the Vue.js application. Both server and client applications are decoupled so you can swap any part with any other library in the future. You can also create mobile apps to consume your API without creating a new server or changing anything in the server side.

Vue.js works at the view layer of the MVC (Model-View-Controller) architecture so it has no no knowledge about any back-end technology and therefore it can be integrated easily with any server-side framework.

Vue.js has many modern features for creating modern view layers. Here is a list of features:

You can find more information about Vue.js by visiting its official website

How to use Vue.js?

You can integrate Vue.js into your project with different ways:

For the sake of simplicity we are going to the <script> tag to include Vue.js in our Django project.

Django is a Python-based web framework, designed for developers with deadlines. Django uses a variation of the Model View Controller or the MVC architectural design pattern called MTV, an abbreviation for Model, Template, View.

Getting started with Django is quite easy, first make sure you have python and pip (python package manager) installed. It's also preferred to use virtualenv to manage and isolate your development environments and also avoid conflicts between different versions of the same package.

Head over to your terminal on Mac and Linux or command prompt on Windows then run the following commands:

Next open setting.py in project's root folder then add your newly created app to INSTALLED_APPS array.

One last step to properly set up the Django project: you need to migrate your database.

This will create a sqlite database file in your project's root folder and create Django tables. If you want to use another database system such as PostgreSQL, make sure to update your settings.

Django REST framework is a powerful and flexible toolkit for building Web APIs.

Some reasons you might want to use REST framework:

The Web browsable API is a huge usability win for your developers. Authentication policies including packages for OAuth1a and OAuth2. Serialization that supports both ORM and non-ORM data sources. Customizable all the way down - just use regular function-based views if you don't need the more powerful features. Extensive documentation, and great community support. Used and trusted by internationally recognized companies including Mozilla, Red Hat, Heroku, and Eventbrite.

You also need to install DRF and add it to your project's settings file:

Then add rest_framework to INSTALLED_APPS array in settings.py.

We don't need to create a separate view function or class-based view in demoapp/views.py but you can do it if you want. Since the view is used to only render the template we are going to use TemplateView.as_view() method and map the view directly to ^$in urls.py

We open urls.py then we import TemplateView then create an URL mapping with the template_name set to demoapp/index.html

You can also create a view function in demoapp/views.py:

then map it with:

Open settings.py then in TEMPLATES array add the following setting if it's not present

This tells Django where to look for templates.

Next you'll need to create a template file (home.html) in demoapp/templates/demoapp

You can start your development server to check if everything works as expected:

Next open your browser and navigate to http://localhost:8000/.

How to Integrate Vue.js with Django Rest Framework?

You have two options to integrate Vue.js with Django Rest Framework:

In both cases, we use DRF to build an API server then we consume the API from Vue.js application using HTTP clients such as Axios, vue-resource or the browser's fetch API.

Let's use a Jinja2 template to serve a Vue.js application.

Include Vue.js in the <head>:

The interpolation delimiters `are the same for Jinja2 templating system and Vue.js. Lucky for us, Vue.js provides a way to change them, so we'll be using${and}$`

That's it we have integrated Vue.js with Django. If you run your Django server and navigate to your app, you should see Hell from Vue.js message.

Now we need to create an API then consume data from our simple Vue.js application mounted from the home.html template.

First make sure to download and add resource-vue.min.js to your app static folder (demoapp/static/demoapp).

You can also use it from a CDN

You can find more information frol the Github official repository for resource-vue.

Before you can use the HTTP service you need to sets it up:

All requests should be be relative to root.

Please note that vue-resource was retired but it's still used and developed as a separate project. If you want other alternatives you can use Axios HTTP client.

Building an API with DRF

We are not going to reinvent the wheel here, instead we'll use a simple API that we have previously built in this tutorial. It's a simple API for managing products inventories with four models: Product, Family, Location and Transaction and four API endpoints /products, /families, /locations and /transactions. So make sure to follow that tutorial for building this API if this is your first time working with Django Rest Framework.

Sending an API call to Django Rest API server is easy. You simply use the injected $http service with an HTTP method: GET, POST, PUT or DELETE (CRUD operations)

Add a method to your Vue.js application that fetches the list of products

So we added a products variable in Vue.js data object to hold our fetched products then we declared a method getProducts() (in Vue.js methods object). In this method we use this.$http.get() to send a GET request to our DRF server then we assign the result to this.products array.

Next we call getProducts() method when the Vue.js application gets mounted.

Now let's see how we can add display these products in the HTML template.

So we use v-for for iterating through the products array then we use the custom interpolation delimiters to show product's title and description.

In this tutorial we have seen how to get started using the Django Rest API with Vue.js to build CRUD applications that consume an API from a Vue.js front-end using vue-resource plugin to send HTTP requests.