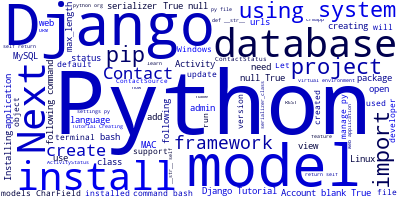 In this tutorial series, you'll learn about Django 3 by creating a CRUD example application with database, admin access, and REST API views. We'll be using MySQL as the database system.

Throughout this beginner's tutorial for Django 3, we are going to learn to build web applications with Python and Django. This tutorial assumes no prior experience with Django, so we'll be covering the basic concepts and elements of the Django framework by emphasizing essential theory with practice.

Basically, we are going to learn Django fundamental concepts while building a simple CRM web application.

This tutorial doesn't only cover fundamental basics of Django but also advanced concepts such as how to use and integrate Django with modern front end frameworks like Angular 2+, Vue and React.

You'll learn about CRUD, database ORM, how to create API views and URLs.

Django 3 comes with many new features such as:

MVC is a software architectural design pattern which encourages the separation of concerns and effective collaboration between designers and developers when working on the same project. It basically divides or separates your app into three parts:

Thanks to MVC, you as a developer can work in the model and controller parts without being concerned with the user interface (left to designers) so if anything changes on the side of designers on the user interface, you can rest assured that you will not be affected.

Python is a general purpose programing language that's suitable for developing all kind of applications including web applications. Python is known by a clean syntax and a large standard library which contains a wide range of modules that can be used by developers to build their applications instead of reinventing the wheel.

Here is a list of features and characteristics of Python:

For more information you can head to http://python.org/ where you can also download Python binaries for supported systems.

For Linux and MAC, Python is included by default so you don't have to install it. For Windows just head over to the official Python website and grab your installer. Just like any normal Windows program, the installation dead process is easy and straightforward.

Due to its popularity and large community, Python has numerous web frameworks among them Django. So what makes Django the right choice for you or your next project?

Django is a batteries-included framework

Django includes a set of batteries that can be used to solve common web problems without reinventing the wheel such as:

Django has a powerful ORM (Object Relational Mapper) which allows developers to use Python OOP classes and methods instead of SQL tables and queries to work with SQL based databases. Thanks to the Django ORM, developers can work with any database system such as MySQL or PostgresSQL without knowing anything about SQL. In the same time the ORM doesn't get in the way. You can write custom SQL anytime you want especially if you need to optimize the queries against your server database for increased performance.

Django is a very suitable framework for quickly building prototypes thanks to its auto-generated admin interface.

You can generate a full fledged admin application that can be used to do all sorts of CRUD operations against your database models you have registered with the admin module using a few lines of code.

Django has a great community that has contributed all sorts of awesome things to Django from tutorials and books to reusable open source packages that extend the core framework to include solutions for even more web development problems without reinventing the wheel or wasting time implementing what other developers have already created.

Django has also one of the most extensive and useful documentation on the web which can gets you up and running with Django in no time.

As a conclusion, if you are looking for a web framework full of features that makes building web applications fun and easy and that has all what you can expect from a modern framework. Django is the right choice for you if you are a Python developer.

In this tutorial part, we are going to see how to install Python and Django on the major available operating systems i.e Windows, Linux and MAC.

At this point of our Django tutorial, we have covered what is Python, MVD and Django and the features of the Django. Let's now see how to install Python and a local development environment with pip and venv.

Depending on your operating system you may or may not need to install Python. In Linux and MAC OS Python is included by default. You may only need to update it if the installed version is outdated.

Python is not installed by default on Windows, so you'll need to grab the official installer from the official Python website at http://www.python.org/download/. Next launch the installer and follow the wizard to install Python just like any other Windows program.

Also make sure to add Python root folder to system path environment variable so you can execute the Python executable from any directory using the command prompt.

Next open a command prompt and type python. You should be presented with a Python Interactive Shell printing the current version of Python and prompting you to enter your Python commands (Python is an interpreted language)

If you are using a Linux system, there is a great chance that you already have Python installed but you may have an old version. In this case you can very easily update it via your terminal depending on your Linux distribution.

For Debian based distributions, like Ubuntu you can use the apt package manager

This will update your Python version to the latest available version.

Now if you managed to install or update Python on your own system or in case you have verified that you already have an updated version of Python installed on your system let's continue by installing Django.

Open your terminal and enter:

You can now install Django on your system using pip

While you can do this to install Django, globally on your system, it's strongly not recommend. Instead you need to use a virtual environement to install packages.

In this Django tutorial, we'll be using a MySQL database. In your terminal invoke the mysql client using the following command:

Next, run the following SQL statement to create a database:

Let's start our tutorial by creating a virtual environment. Open a new terminal, navigate to a working folder and run the following command:

Next, activate the virtual environment using the following command:

At this point of our tutorial, we've created a virtual environment for our Django project. Let's now proceed to creating our project.

You will also need to install the MySQL client for Python using pip:

Now, let's proceed to creating our django project. In your terminal, run the following command:

This command will take care of creating a bunch of necessary files for the project.

Executing the tree command in the root of our created project will show us the files that were created.

settings.py is the project configuration file. You can use this file to specify every configuration option of your project such as the installed apps, site language and database options etc.

urls.py is a special Django file which maps all your web app urls to the views.

wsgi.py is necessary for starting a wsgi application server.

manage.py is another Django utility to manage the project including creating database and starting the local development server.

These are the basic files that you will find in every Django project. Now the next step is to set up and create the database.

Next, open the settings.py file and update the database setting to point to our crmdb database:

Next, add rest_framework to the INSTALLED_APPS array:

Next, let's create a Django application for encapsulating our core CRM functionality. In your terminal, run the following command:

Next, you need to add it in the settings.py file:

We have three main models which are Contact, Account and Activity. The last three models are simply lookup tables (They can be replaced by an enum).

Open the crmapp/models.py file and the following code:

After creating models we need to create the serializers. In the crmapp folder create a serializers.py file:

Next, open the file and add the following imports:

Next, add a serializer class for each model:

After creating the model serializers, let's now create the API views. Open the crmapp/views.py file and add the following imports:

Next, add the following views:

After creating these models, you need to create migrations using the following command:

Next, you need to migrate your database using the following command:

Let's now create the API URLs to access our API views. Open the urls.py file and add the following imports:

Next, you need to add it to your project settings.py file:

Next, you need to add corsheaders.middleware.CorsMiddleware middleware to the middleware classes in settings.py

You can then, either enable CORS for all domains by adding the following setting:

You can find more configuration options from the docs.

Django has a local development server that can be used while developing your project. It's a simple and primitive server which's suitable only for development not for production.

To start the local server for your project, you can simply issue the following command inside your project root directory:

Next navigate to the http://localhost:8000/ address with a web browser.

You should see a web page with a message:

To conclude this django 3 tutorial, let's summarize what we have done. We have created a new Django project, created and migrated a MySQL database, built a simple CRM REST API with Django REST framework and started a local development server.