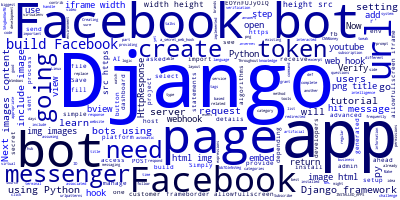 Throughout this tutorial ,we are going to see how to build a Facebook messenger bot using Python and Django framework . The Facebook messenger platform is one of the biggest platforms for messaging on the Internet in these days .

If you are a business and your have a Facebook page that it might be a good idea to provide your users with an automatic method to get some answers such as the frequently asked questions that get asked all the time by customers but you can also build more advanced bots that use artificial intelligence (AI) .

Here is a list of the best messenger bots

You'll learn how to build a simple Facebook bot step by step .The bot will not use any advanced AI algorithms but only a simple IF based statements so you need to have some knowledge about Python language and Django framework .

For the category of your app select Apps for Messenger then fill in the details and hit Create App ID button .

You will be redirected to your app dashboard so you can tweak different settings .

The most important setting is the associated page since your users will be interacted with your page .

When you select a page and grant page permissions to your app ,a token to access the page will be generated .

You need this token so your app can be able to send messages to page users .

A Facebook bot needs to have a server side so you need a server to host your bot code which will process messages and respond with the appropriate messages depending on the logic you have implemented .This can be a simple IF statements and regular expressions or can be more advanced AI algorithms .

I'm assuming you already have Python and related development tools installed on your system .

Open up your terminal under Linux/MAC or command prompt under Windows and follow these steps .

Create a virtual environment with

Next install Django framework with

Next create a Django project

The next thing is to create a Django app

Next wire up your app in the settings.py file under INSTALLED_APPS

Now we need to setup the URLS so go ahead and open the project urls.py file and add the app urls

So now we have created both a Facebook app for our bot and a Django project/app for the bot but how can we hook both apps to create our complete working Facebook messenger bot .

Hooking up Django server with Facebook messenger platform with Webhooks

How can our Django app receives messages sent from Facebook users to page/bot ?

Simply Facebook provides web hooks so whenever there is a realtime message (sent by users to page ) our server receives it via a hook .

How to hook up Facebook and our Django server ?

The steps are easy ,you just need to add an URL to your Django App then let Facebook knows about it so open bot/urls.py and add the following url

Make sure you add a secret name for your web hook so you can avoid any intrusions from bad guys .

You also need to create a view which handles requests from Facebook .Go ahead and open bot/views.py then add this view

So our web hook is 127.0.0.1:8000/bot/asecretweb_hook/ but that is only accessible locally .To tell Facebook about our hook we need to put our server online .

I'm going to use the free tier offered by Heroku to host the bot server which provides also HTTPS access required by Facebook to accept the url as a webhook for your messenger bot .

Next fill in the details as in the screen shot below .

The verification token is not the Page token your generated before but your own secret token ,you can use any password . Also make sure you choose the subscription fields .

Next click Verify and Save button .The verification process will fail ,why ?

So before your verify again ,go to your bview function and modify it to return back the challenge token

Now if you hit Verify and Save ,you should see a success message in the form of a green tick with a "complete" message

Next hit Subscribe .You Django server will now receive any Page events that you have selected as POST requests .

So that is all for this part ,in the next part we are going to see how to handle POST requests and send feedback to our users depending one the sent event .