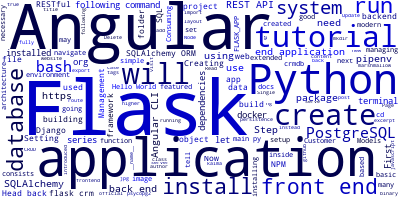 In this tutorial series we'll be using Python, Flask, SQLAlchemy and Angular 5 to build a modern RESTful web application with an architecture that consists of a front-end application with Angular 5 and a back-end REST API using Flask.

The application we'll be building is a simple CRUD (Create, Read, Update and Delete) system for managing customers. This can be further extended to build a fully featured Customer Management System by implementing more use cases.

The first tutorial will cover how to set up both the back-end and front-end applications and how to install the necessary dependencies.

Before we dive into the practical steps let's briefly go over the technologies we are going to use in this tutorial:

Flask: a Python micro-framework for building web applications that's know to be light and scalable. Flask has many features such as:

Angular 5 is the latest version of Angular, the most popular client side framework for building front-end applications with TypeScript. Angular is created, used and supported by Google.

SQLAlchemy is a Python ORM (Object Relational Mapper) and SQL toolkit that allows Python developers to use SQL-based databases (for data persistence and retrieval) without knowing or dealing with SQL but Python objects and methods instead.

Setting Up Flask and Angular

In this section we will learn how we can install both Flask and Angular to setup our development environment.

First of all, to complete this tutorial you will need:

After installing Docker, you only need to run the following command in order to create a PostgreSQL database:

If you have PostgreSQL installed on your system and want to use it instead of docker run the following command:

Now you need to install the Angular CLI so head back to your terminal and run the following command:

You may need to add sudo before your command, depending on your npm configuration.

Now that we have set up the PostgreSQL database and the Angular CLI. Let's bootstrap the back-end application with Python and Flask.

Navigate back to the root of flask-crm then initialize a new Python 3 environment, using pipenv, that will be used to isolate the packages for our project from the system-wide packages.

You can now install the Python dependencies for our project i.e

Head back to your terminal and run the following commands:

After installing the Python dependencies, let's create a Flask application

Head back to your terminal, navigate inside the backend folder, create a main.py file then add the following code just to say hello with Flask

We first import the Flask class from the flask package, next we create an instance of that class (the __name__ argument refers to the application module so we passed to tell flask where to find the other application's files).

Next we create a simple Python function that simply retruns the string Hello World!. This function is decorated with @app.route('/') decorator which tells Flask to call this function and display its result when the user visits the / path or the home URL.

To run this application you need to run the following commands in your terminal:

First we activate the virtual environment, navigate inside the backend folder then export FLASK_APP and run the application server (Exporting FLASK_APP tells flask what file to run, in our case it's the main.py file).

You application server will be running on http://127.0.0.1:5000/. If your visit this address with your web browser you will see a Hello World! displayed.

In the previous step we have installed the Angular CLI. Now let's use it to create a basic Angular 5 application. Head back to your terminal, make sure your are inside flask-crm folder then run the following command to generate the front-end and serve it:

Your application will be running on http://localhost:4200/.

In this tutorial we have introduced the RESTful application that we are going to build throughout these series with Python, Flask and Angular 5.

In the next tutorial you'll get introduced to the SQLAlchemy ORM and we'll use it to create the database models for our back-end application so stay tunned!