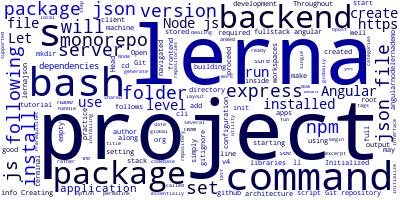 Throughout this tutorial, we'll be building a full stack monorepo project with Lerna, Angular 14, Node.js and Express.js.

We'll use a monorepo architecture to set up our project, which essentially means that we'll use a single repository to handle both client and server applications (as well as any shared libraries) rather than dealing with several repositories. We'll be doing this using an utility called lerna along with npm workspaces.

We’ll be using both npm workspaces and lerna to work with our project’s codebase.

Before starting, make sure you have Node.js along with npm 7+ installed on your local development machine. Workspaces are only supported starting with npm version 7.

Let's get ready to have fun.

Open a new command-line interface and begin by installing lerna globally on your development machine using the following command:

Following this step, create a directory for your project and initialize lerna as follows:

If successfully executed, the previous command should output the following on the screen:

We created the basic architecture of our monorepo project.

The configuration for lerna is stored in the lerna.json file, whereas the settings for the whole (client and server) project is stored in the package.json file. The frontend and backend applications, as well as any libraries you want to use across the two apps, should be located under the packages/ subdirectory. The script will also execute the git init command, which will be used to set up a Git repository. The various configuration options for lerna may be found at https://github.com/lerna/lerna#lernajson.

If you run the ls command on your current project’s folder, you’ll see the following folder structure and files:

Lerna has initialized an empty Git repository, but it’s also a good practice to create a .gitignore file, so simply run the touch .gitignore command at the root of the project and add the following lines:

You can make sure you have a Git repository by running the following command:

This command should have a similar output:

Next, we need to set the version for the entire monorepo project. Simply open the lerna.json file and set and set version to "1.0.0” as follows:

It’s also a good practice to set the version in the project’s level package.json file as follows:

You can find more details on lerna via the official website at https://lerna.js.org/.

Setting up our Node.js server

In this part, we'll proceed to set up our server project and install Express.js, which will allow us to rapidly launch a server without having to contend with the low-level APIs exposed by the Node.js technology.

Let’s start by adding a new backend/ folder inside the monorepo’s packages/ folder.

Head over to your terminal and run the following commands:

Please keep in mind that the folder's name is entirely up to you; you may call it anything you choose.

Since, we’ve, navigated inside the backend/ folder, simply run the following command to generate a package.json file for the backend application:

The --yes option instructs npm to generate a package.json file with the default settings, which are in our case:

Now that we’ve created a node project for the backend application, we can install dependencies that are only required by the server such as express.js since it will be needed to start a server.

Head back to your terminal and run the following command from the packages/backend/ folder which we’ve already navigated into it:

At the time of this writing express v4.17.3 is installed and added to the dependencies object of the server’s package.json file:

For now, let’s proceed to install Angular CLI 14 and create the frontend package that will be powered by Angular.