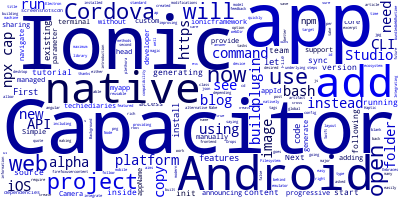 Capacitor aims to provide a better alternative to Cordova for Ionic apps that will allow you to build apps that can run natively on major mobile (Android, iOS etc.), desktop (thanks to Electron) and web (as progressive web apps) platforms.

There is no magic behind Capacitor because what it does is providing a cross platform API that runs the right methods depending on the underlying platform.

Now without further introduction let's see how we can use Capacitor with an Ionic app instead of Cordova.

In future, the Ionic CLI will provide the option to use Capacitor when you generate a new app but for now you'll need to take care of that manually.

First let's start by generating a new Ionic app. For that head over to your terminal and run the following command:

It goes without saying that you need to have the Ionic CLI and Node.js installed on your machine to be able to create Ionic projects.

When asked Would you like to integrate your new app with Cordova to target native iOS and Android? You can answer No since we are going to use Capacitor instead of Cordova (You can also use add --no-cordova to Ionic start command)

Make sure to use your app name for the first parameter and your app id for the second parameter ( npx cap init [appName] [appId] ).

This command will add a capacitor.config.json inside your project folder with the following content

Now you need to generate the www folder with the Ionic app built files by running the build command:

before you can run your app you need to add a platform either android, ios or web so let's add the Android platform

You can also use the copy command instead of sync

Now you can open your Android project using the Android Studio using:

This will prompt you to choose a platform to open android, ios or web select android for Android.

You can now use Android Studio to launch your app using an emulator or a real device.

In this short tutorial we have seen how to add Capacitor to an Ionic 4 project. Next we'll see how to use Capacitor plugins to access native device features such as the Camera and Geolocation.