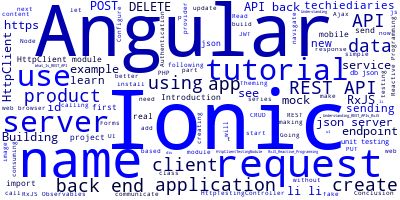 In this Ionic 5/Angular tutorial, we'll see by example how to send HTTP (AJAX) requests to REST API servers (for calling APIs and consuming data) in Ionic 5 and Angular.

Note: For a complete and detailed tutorial, check out:

We'll also learn how to use the RxJS Observables and the operators such as map() to work with HttpClient requests and responses.

Finally we'll learn with a simple example how to use the HttpClientTestingModule to mock requests with its HttpTestingController service for the purpose of unit testing your Angular 4.3+ or Ionic 3 application without making real API calls.

This tutorial is part of a tutorial series that contains the following tutorials:

Most modern applications, nowadays, rely on some remote service to consume data. REST APIs provide an interface that allows different clients such as web browsers and mobile devices to communicate with HTTP servers without building a back-end for each client.

Ionic 2+ is based on Angular 2+, a completely rewritten from scratch framework for building web applications with TypeScript (a super-set and strongly typed version of JavaScript created by Microsoft).

This tutorial is a part of a series of tutorials for teaching developers how to create CRUD mobile applications with Ionic 3 and the Angular's HttpClient module.

You'll learn, by a simple example:

Throughout these tutorials we'll be calling different hosted REST APIs. We will also see how to build APIs using pure PHP and also Django.

We'll be using the new HttpClient module, introduced in Angular 4.3+, instead of the old Angular HTTP service, which is now deprecated in Angular 5.

First, let's cover some HTTP-related terminology: Clients (like web browsers and mobile devices) communicate with API-based servers through sending HTTP requests. Then servers replay back with HTTP responses. HTTP requests and responses hold metadata and data that get exchanged between the client and the server.

An API stands for Application Programing Interface and it provides a way for communication between clients and servers via HTTP methods (POST, GET, PUT and DELETE etc.).

REST is acronym for REpresentational State Transfer. It's an architectural style for distributed systems which is based on 6 constraints among them the client-server architecture and statelessness. You can read more about REST in this Wikipedia article.

RxJS is a library for reactive programming using Observables, to make it easier to compose asynchronous or callback-based code. This project is a rewrite of Reactive-Extensions/RxJS with better performance, better modularity, better debuggable call stacks, while staying mostly backwards compatible, with some breaking changes that reduce the API surface. --http://reactivex.io/rxjs/

What Are You Going to Learn?

I'm not going to cover how to create an Ionic 3 application since I have done it in many tutorials before. I also assume you have a development environment setup. For quickly getting up and running you only have to install Node.js, Cordova and the Ionic CLI so make sure you have these requirments installed then next generate a new Ionic 3 project and follow these steps:

By the end of this article, you will, hopefully, learn:

So, let’s get started!

Configure the Ionic Application to Use The HttpClient Module

Let's start with the first step--we need to tell the app to use the new Angular 4.3+ module (i.e HttpClient) to send HTTP requests. It's a part of Angular, we just need to import it and then add it to our imports array in src/app/app.module.ts.

So go ahead and open the app module file in src/app/app.module.ts then update it to reflect the changes below:

Actually, we are going to create a fake API back-end using json-server which allows you to quickly generate an API from JSON data to prototype your application before creating the real endpoints. You can then swap the fake back-end with a real API that can be built using your prefered language such as JavaScript and Node.js, PHP or Python etc.

So let's first install json-server. Head back to your terminal or command prompt, navigate to your project's root folder, where package.json exists, then run the following command:

This will install the json-server package and add it to the list of your project's development dependencies.

Next, in the same root folder of your project, create a file named db.json then add the following contents to create JSON data for json-server to use when exposing the endpoints:

You can see the full example from this link.

Next you can start the API server with:

That's all you need to do! You don't have to setup a database or create API endpoints to start building your front-end application that needs to consume custom endpoints, but of course that's just for testing before you can build your real API back-end.

You now have a REST API server listening on port 3000 which can respond to POST, GET, PUT and DELETE requests.

So just to make sure your back-end is running as expected, you can use your web browser to navigate to http://localhost:3000.

If you just create the one products array like in the previous example, the following endpoints will be exposed:

If you now use your web browser to navigate to this endpoint: http://localhost:3000/products, you should see a JSON response with all the products we have created in db.json or by sending POST requests (which eventually get persisted in db.json).

In this first tutorial we have built the fake API back-end. In the next tutorial we'll build the actual HTTP service.