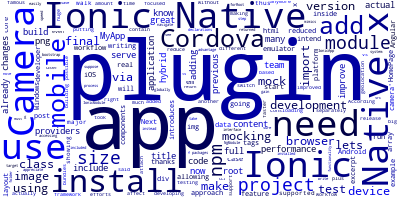 The Ionic Native 3.x introduces many features and changes to how to add native Cordova plugins to your Ionic 2 project (Ionic 1 and Angular 1 are not supported by this version of Ionic native thus you need to use the previous version) .

Ionic native bundles a great amount of plugins code even if you don't use them in your mobile apps which make their size huge so Ionic native 3.x took another different approach from the previous versions which is putting each plugin code inside its own npm module .The user can then install the plugin(s) he needs ,now mobile apps contain only the core of Ionic native plus the plugins the app actually use .

According to Ionic team ,by using this approach the final app size is reduced by 15% which will also improve the loading time of Ionic apps.

So how does that affect your development workflow ?

As we have said ,to use an Ionic native you need to install it separately via npm .

You also need to include the added plugin in the application root module under the providers array .

The Ionic 3.x release did not only reduced the size of Ionic apps but also improved the development workfow by adding full support of plugin mocking which makes building and testing Ionic apps much faster by allowing full app development on the browser without the need of mobile devices and emulators .

As you already know you can use the browser to test your Ionic apps thanks to ionic serve but when you need to use a native feature of mobile devices such as the Camera or the geolocation you have to switch to use an emulator or attach an actual mobile device but that is not the case anymore with Ionic Native 3.x because you can test any of the 130+ Ionic Native plugins right on the browser by writing plugin mocks which makes it possible to build your full Ionic app on the browser via the famous ionic serve . As a developer you are going to appreciate the development speed you are going to gain thanks to Ionic Native 3.x .

But what is native plugin mocking ?

Plugin mocking is the process of writing a plugin mock which is a class that mimics the functionality of a real native plugin so to take advantage of plugin mocking you need to write mocks for the plugins that you intend to use in your Ionic app .

A plugin mock must have the same class interface as the real plugin and needs to return some test data instead of the actual data returned by actual plugin .

How to install and use an Ionic native plugin ?

The core of Ionic Native module is included in each Ionic project but you need to install Ionic Native packages for the native plugins that you intend to use in your application .

Now lets see an example of adding a Cordova plugin to an Ionic 2 project .

Lets suppose we need to add the Camera plugin to our project .We will start by adding the target platform (Android ,iOS or Windows )

So navigate inside your project root folder and run

You need to make sure you have Cordova installed globally on your system .If that is not the case ,you can easily install via npm with npm install cordova -g

Next we need to add the Cordova plugin for accessing device camera .Using the Ionic CLI run

The final step you need to do before you can use the plugin in your components is :

Add it to providers array .

Ionic Native 3.x has introduced many improvements either in terms of performance and final app size or in development workflow allowing developers to build and test apps entirely on the browser using Ionic serve and produce apps which are 15% smaller .