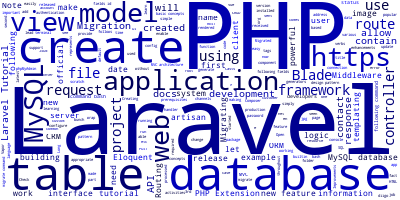 Laravel 7 is the latest version of the most popular PHP framework for web development. It comes with a bunch of a new features and enhancements.

Note: Laravel 6 is the current LTS (Long Time Support) version instead of Laravel 5.5.

This is a table from the official docs that displays the release dates and other important dates for the various versions of Laravel:

In this tutorial, we'll see the new features of Laravel 6, we'll learn how to generate a Laravel 6 project using Composer and how to build a CRM web application from scratch. We'll see how to configure a MySQL database for our app, create models, migrate our database and create controllers for exposing a REST API that will then be consumed from a Vue.js interface.

You'll also learn about the basic concepts of Laravel such as routing, controllers, models and views, etc.

The New Features of Laravel 6/7

As mentionned, Laravel 6 comes with a bunch of new features and enhancements such as:

Check out the docs for more details.

If this is your first time working with Laravel, let's get started by learning about the basic Laravel concepts. In fact, these concepts are common between most web development frameworks so if you are famiiar with other frameworks you shoud be able to easily grasp them:

Routing is an important feature in any web application and allows your app to route HTTP requests to the appropriate handler whcih sends an appropriate response be it an HTML view or a JSON response.

In Laravel, routing is builtin in the core of the framework and provides a flexible and powerful API for developers to make it easy to create routes and map them to their handlers.

It simpy works by maping HTTP verbs such as GET and POST to functions that execute the approriate actions when requests are received.

For example, you can use a GET request to retrieve a resource from the server when the coreesonding route is visited or a POST request to submit a form.

You can create routes in the routes folder of your project in one of the avaiabe files:

This is an example route:

A Laravel controller reresents the C part in the MVC architecture which is reponsible for orchistering the oerations between the View and Model and passing information from the model to the view for rendering it.

You can use the following command to generate a controller:

A Laravel view represents the V part of the MVC architecture. They are simply HTML pages (with CSS and JavaScript) composing the UI of the application that are sent to the client once they are processed and rendered. Views are merely presentationel i.e they don't contain business logic .

Laravel makes use a templating language called Blade which is powerful and easy to use. They support modern features like inheritance which enables the reuse of templates.

You can create templates in the resources/views folder of your project using the blade.php extension.

According to the official docs :

Blade is the simple, yet powerful templating engine provided with Laravel. Unlike other popular PHP templating engines, Blade does not restrict you from using plain PHP code in your views. In fact, all Blade views are compiled into plain PHP code and cached until they are modified, meaning Blade adds essentially zero overhead to your application. Blade view files use the .blade.php file extension and are typically stored in the resources/views directory.

Check out the docs for all the features of Blade.

Traditionnal frameworks like Laravel works based on HTTP request and response cycles. Requests are sent from clients using HTTP verbs like GET, POST, DELETE and UPDATE. When they are processed by Laravel, appropriate responses are created and sent back to clients.

The request object can have various information like user input.

A response is created and sent from the controller mapped to the route which received the request.

In Laravel, the Model from the MVC pattern represents the part that contains the business/domain logic. It corresnponds to a table in the database and allow you to interact with the database with high level APIs.

Migrations allow you to create the intial database tables and their fields and then track any changes made to the database schema during the development or even in production and apply them without the need of dropping and recreating the database each time.

Migrations can be important in production more than development since in most cases , you can drop a database without any problem when you are still developing your application but you can's drop a production database with users data if you need to change your database schema at the future. In this case, migrations can help you to easily evolve the structure of your database while keeping the old data.

Middlewares are pieces of code that are executed before some specific HTTP requests before running the correspong controllers.

Laravel includes several builtin middlewares for authentication and CSRF protection but you can also create your custom middlewares when needed.

Laravel makes use of an ORM which stands for Object Relationnal Mapper and implements the PHP Active Record Pattern. This allows you to work with databases without actually dealing with SQL and the differences between database systems.

The Laravel ORM is called Eloquent ORM and is a very powerful and easy to use ORM, which allows you to interact with the underlying database tables and define relationships between them using a clear and concise syntax.

In Laravel, each database table is mapped to its corresponding Eloquent model which contains various methods for accessing and updating the data in the table.

Laravel is web development framework for building web applications with PHP. It's created and maintained by Taylor Otwell. It's based on modern and powerful design patterns like MVC, dependeny injection and ORMs.

Since v1 which was released in June 2011, the framework has been groing since then to become one of the most powerful and popular framework in the PHP community. It's now in version 7.

How Does Laravel Framework Work?

Laravel works by providing a set of abtractions on top of PHP and Symfony that make it easy to listen for requests and send the right responses either JSON data in the case of REST or a rendered HTML document in a tradiotional web application. It also provides a powerful ORM which abtracts away all the complexities of dealing with SQL databases ease database migrations.

A framework provides developers with a set of APIs and patterns for solving common web development problems encoutered by web developers. Laravel follows an MVC architecture.

MVC stands for Model View Controller and its an architectural design pattern that enables the sepration of concerns. This is its definition from Wikipedia:

Model–View–Controller (usually known as MVC) is a software design pattern commonly used for developing user interfaces which divides the related program logic into three interconnected elements. This is done to separate internal representations of information from the ways information is presented to and accepted from the user. Following the MVC design pattern decouples these major components allowing for code reuse and parallel development.

Now that we have the basic concepts of the framework, let's see the prerequisites required for working with our Laravel 6 tutorial.

You'll need to have a few prerequisites to be able to successfully complete this tutorial:

If you have these prerequisites, let's get started by creating our first web project with Laravel 6.

You can create a new Laravel 6 project using the following command from your terminal:

We'll be using MySQL, the most popular database system used by PHP and Laravel developers so make sure you have created a database for your project. You can simply use the mysql client. Open a new terminal window and run the following command:

You will get prompted for a password. Enter the one you submitted when you configured your MySQL installation and hit Enter.

When the mysql clients starts, enter the following SQL instruction to create a database:

Note: You can also use phpMyAdmin to create and work with MySQL databases. phpMyAdmin is a free web interface tool created in PHP, intended to handle the administration of MySQL over the Web. It's beginners friendlier tool that's commonly used by PHP developers.

Now, let's let Laravel know about our created database. Open the .env file in the root of your project and update the MySQL credentials with your own values:

Please note that you need to provide the correct username and password for a valid MySQL user in your system and also the correct name of a created database.

This will allow your application to connect to your MySQL database.

You can also configure the database connection in the config/database.php.

The database configuration for your application is located at config/database.php. In this file you may define all of your database connections, as well as specify which connection should be used by default. Examples for most of the supported database systems are provided in this file. The official docs

Next, let's create the database tables using the following command:

Note: Until now, we didn't create any models but Laravel makes use of multiple tables so we need to run the previous command to create them in our database. After we create our own models, we can run the artisan migrate command again to update the database structure.

After setting up your MySQL database crendentails, you will need to create some tables required by Laravel by running the migrate command:

The migrate command will apply a few necessary builtin migrations that will create the tables for users, password resets and failed jobs. These tables are required for the inner working of Laravel.

This is the output of this migrate command:

At this point of our Laravel tutorial, if you get Laravel Migration Error: Syntax error or access violation: 1071 Specified key was too long; max key length is 767 bytes

Simply, open the config/database.php file and change charset and collation as follows:

Before setting up a fully-fledged server like Apache, you can use the PHP's built-in development server for locally serving your application. In your terminal, run the serve command from the root of your project as follows:

This will start a local development server at http://localhost:8000.

If this command is not properly working, you can call the PHP builtin server directly using the following command:

Head back to your web browser and navigate to that address, you should see the following interface: The Application We'll Be Building

For the sake of simplicity we'll try to add few interfaces as we can in our application. The main interface is a dashboard which contains the table of contacts and their status (lead, opportunity and customer). We'll not add login and authentication in this tutorial as we'll be the subject of another tutorial.

In our CRM database we'll be making use of the following tables:

The contacts table has the following fields:

The contact_status table has the following fields:

The accounts table has the following fields:

The activities table has the following fields:

The activity_status table has the following fields:

As a wrap-up of the first part of our Laravel 6/7 tutorial, we've introduced Laravel framework, seen the new features of Laravel 6/7, seen the the basic concepts required for beginners, created a project using Composer based on the latest v7 and configured our MySQL database.

We have also seen the requirements of the CRM application we'll be building throughout this tutorial series. If you are ready, let's continue with the second tutorial where we'll create models and migrations for our app.