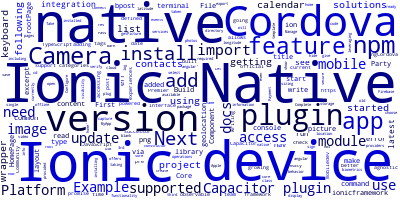 Ionic native is a wrapper for Cordova and Capacitor plugins that adds a better integration with JavaScript and TypeScript by adding promise and observable support. Ionic native is being defined by Ionic team as a successor to ngCordova for accessing device native features.

In this post, we are also going to see how to check the current version of your Ionic Native module and how to update Ionic Native to the latest version.

At the time of this writing, Ionic Native is in version 5.

You can use Ionic Native to add any native feature (supported by a Cordova or Capacitor plugin) to your Ionic 5 mobile app.

Ionic native is an Ionic wrapper for Cordova and Capacitor plugins which allows you to interface with mobile device in your Ionic 5 app.

From the official docs:

Build native-powered app experiences with pre-built solutions and a growing library of over 250 Premier and Community plugins. Ionic Native makes it easy to add native device functionality to any Ionic app leveraging Cordova or Capacitor.

These are some common plugins provided by Ionic Native to access the device native features:

How to Install Ionic Native 5?

Ionic native is just an NPM module so you can install it and update via npm using your terminal.

First of all, we need to get the list of all available ionic-native versions so open up your terminal and type

How to Use Ionic Native 5 by Example?

Next, install Ionic Native via npm using the following command:

That is it, you can now use any Cordova/Capacitor plugin supported by Ionic Native 5 but you need to make sure it's added to your project. If it's not added, Ionic Native will warn you and even give you the package name to install the required Cordova or Capacitor plugin.

After installing the plugin, you can import the plugin from the ionic-native module and start using it.

Let's install as an example the camera plugin:

Next, just build and run your Ionic 5 project and plug in your device with an USB cable:

You can see a list of all supported Cordova plugins and examples on how to use them with Ionic Native here.