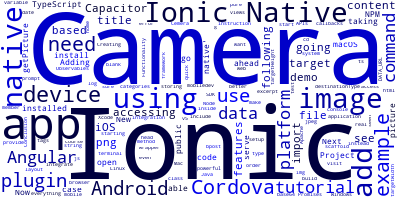 In this tutorial, we are going to see an example demo application for accessing native device camera in Ionic 5 apps based on Angular.

To access or integrate native device features with Ionic 5 apps or even with pure Apache Cordova/Capacitor apps (and mobile web views) we can use Ionic Native 5 which is a wrapper for Cordova or Capacitor plugins that provide better integration with Angular and TypeScript so instead of using callbacks we can use the powerful Promises and Observables APIs.

Before starting make sure you have Node.js and NPM installed, and of course the Ionic framework v5

Since we are using native device features - The Camera - You need to install Cordova using the following command:

We need to test our app on a real device. In order to be able to build for your target platform, Android or iOS you need to have Java SDK installed in case of Android and you need to have a macOS system and Xcode for iOS.

So go ahead, open up your terminal under Linux/Mac or command prompt under Windows and then scaffold a new Ionic 5 app using:

Go ahead and serve the app using the following command:

You should be able to visit your app with the browser.

Adding the Android Platform to your Ionic 5 Project

Now you need to add the target platform. In our case it's Android but you can target iOS too if you have macOS:

Next add the camera plugin using the following command:

Adding the Camera Functionality to your Ionic 5 App

On the head of the file add the import instruction to import Camera from 'ionic-native':

Next inside your TypeScript class, add a public member variable for storing image data

And then add the method for taking a picture

In this quick tutorial, we've seen how to use the native device Camera with Ionic 5 based on Angular, Ionic Native and Cordova/Capacitor.