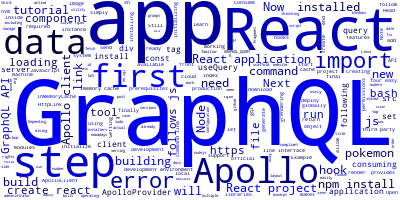 We'll build our application in four easy and clear steps as follows:

Before diving into the actual steps, let's first see the prerequisites that you will need to have in order to follow this tutorial:

If you don't have Node installed, you can download the installers from the official website or you can also use NVM, a POSIX-compliant bash script to install and manage multiple active versions of Node in your system.

Note: You may be thincking, Node is required for building server-side apps but we are here building a front-end app so why do we need it? Simply because most front-end libraries nowadays have CLI (Command-line Interfaces) tools to easily scaffold and work with projects including React. These tools are built on top of Node.js. We need to have Node and NPM to install and run the create-react-app tool.

Now that we have seen the prerequisites of our tutorial, let's start with the first step.

Step 1 - Setting up a development environment

In this first step, we'll start by setting up a development environment for building our first React application.

Since, as stated in the prerequisites, Node and NPM should have been already installed on your machine we only need to install the create-react-app tool to set up our development environment.

The create-react-app utility is the official tool for initializing and working (serving and building etc.) with React projects.

Head over to a new command-line interface and run the npm install command as follows:

Note: Depending on your operating system and npm configuration, You may get EACCESS errors when installing the tool globally. In this case, you can simply add sudo before your command in Linux and macOS, or use a command prompt with the administrator rights in Windows. You can also simply fix your npm permissions.

As the time of working in this tutorial, create-react-app v3.1.1 was installed.

That's all for this step, we are ready for creating a new React project.

In the second step, we'll initialize a new React project.

Head over to your command-line interface and execute the following command:

Wait for create-react-app to generate the project's files and install the required dependencies from npm and then run the following commands to serve the application locally using a development server:

The development server will be available from the http://localhost:3000 address.

This is a screenshot of our React application running inside a web browser: Now that we hava initialized our React application and served it using a local server that has support for live-reload, let's start coding!

In this third step, we'll see how to consume our GraphQL API using the Apollo client. But what's Apollo client?

It is a GraphQL client that provides many advanced features such as intelligent caching that makes it a single source of truth for the local and remote data in your application.

These are the required libraries for setting up Apollo:

To set up Apollo and add GraphQL support in our application we'll need to install a few libraries from npm.

Open a new command-line interface and run the following commands:

Now, let's use the GraphQL client in our app.

Open the src/index.js file in your React project and add the following imports:

Next, create in-memory cache and the HTTP link instances as follows

The HTTP link allows us to send HTTP requests to the GraphQL API.

Now we have an instance of Apollo client linked to the in-memory cache and HTTP link instances.

What is left is to connect the Apollo client with our React component(s) using ApolloProvider.

Go to the src/index.js file and import ApolloProvider as follows:

Next, wrap the App component with ApolloProvider as follows:

Now, how to send a GraphQL query to the API?

Apollo provides a React hook that makes it easy to call GraphQL operations from the UI components.

Go to the src/App.js file and import useQuery and gql as follows:

The gql tag allows you to wrap GraphQL queries.

The useQuery hook exposes the error, loading and data properties from a result object.

Next, add the following example GraphQL query in the src/App.js file:

This query will allow you to get the first 100 pokémons with their id, number, name, and image.

Next, send the GraphQL query with the useQuery hook as follows:

We simply destructure the object returned from the useQuery() hook to get the data, loading and error attributes.

When loading equals true i.e when data is still being received, the App component will render Still loading...

Otherwise we'll have our data in the data variable which we can render as follows:

That's it, we have set up the GraphQL client in our application and sent a query to fetch data from our API then rendered data in our React component.

In this final step, we'll proceed to build our React application.

Simpy to your command-line interface and run the followng command from the root of your React project:

This will generate a production-ready bundle inside the build folder of your project that you can deploy to your cloud server.

As a recap of our tutorial. We have learned in four easy steps how to create a React application and fetch data from a GraphQL API and display it in our component then finally build the app for production.