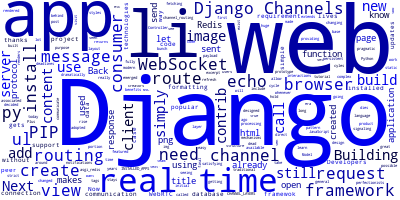 Django is a fully featured web framework for building web applications using the general purpose Python language . Django creators call it the pragmatic framework for perfectionists with deadlines which is really true .If you have already used Django for building web apps for clients then you already know how Django makes it dead easy to build a web application from the initial prototype to the final product .But Django was created ten years ago for satisfying the requirements for that era .Back then the web wasn't as modern and complex as today since the great portion of web apps were a bunch of static pages rendered on the server after fetching and formatting some data from a database .Developers used the popular MVC (Model View Controller ) design pattern to structure their code .Now it is 2017 ,the web has dramatically changed the web is seeing or has already seen the rise of the real time apps with a lot of interactions .Users don't have to refresh the page each time to see the updates .Apps can send real time notifications and updates whenever they are available etc .This is all possible thanks to the new technologies that emerged such as

When Django was created ,these technologies did not exist and real time wasn't a requirement so the framewok was built around strict HTTP request and response cyles .

When you visit a web application ,the browser simply makes an HTTP request .On the server where your app lives Django calls the associated view ,which is simply a function that do some work such as processing ,getting data from database and formatting it then returns a response which gets sent to the browser with the HTML content (Plus styles and JavaScript ) as a payload ,the browser then renders the web pages .

In the traditional HTTP Request - HTTP Response cycle ,the Django view function which gets called when a new request is made ,stays only as long as the request lives and we can't hold a connection open or communicate with the browser (client) when the request dies so we can't take benefits from the new real time protocol or WebSockets .

But since Django is still a very popular framework that's still adopted by a huge base of web developers ,the team behind this framework decided to support the real time web but without changing the way the framework is used so they have come up with Django channels .

So what is Django Channels ?

To use Django Channels you just need to install it via PIP with any version of Django starting from 1.8

After creating a virtual environment and installing Django ,you can then install Channels with PIP

Next you need to add channels to your project installed apps

Thanks to Channels ,Django is still the framewok you are familiar with but has some new concepts which you need to know if you want to build real time web apps .

You can use any ASGI-compliant channel layer with Django Channels or you can even write your own custom channel .In this example we will use Redis so let is install it first with PIP

Next create a Django app inside your project ,let is call it chat

Then add the app to your installed apps in settings.py

With Django Channels ,terminologies are different so keep in mind views become consumers and urls are simply routes

Now lets create our first consumer (view) which will handle messages sent through WebSockets from a browser .

The consumer is very simple it just echo back the messages it receives to the client .

Open routing.py and add this code to create a route