Semantic Versioning/Semver for Laravel 6 Devs: Why there is a caret (^) in your composer.json 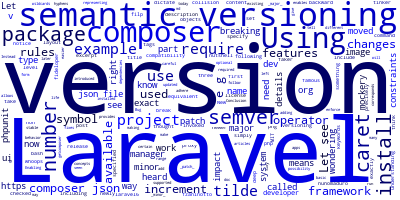 You have heard that Laravel 6 has moved to semantic versioning (also called semver) but you are wondering what is that and does it impact how you work with your Laravel projects? Let's see in more details what is semantic versioning.

In nutshell, since Laravel 6 uses semver, you now need to use version constraints like the famous caret when you are including the Laravel framework in your projects because the major releases include breaking changes.

For example, this is a part of the composer.json file of a Laravel 6 project:

You can notice the caret symbol (^) in the versions of all packages in the require and require-dev objects. This is a part of the semver system.

As a first thought, you think of this as a way to let the package manager know that it can install versions other than the exactly specified number. And, you are right! But let's take a deep understanding of this.

What is Semantic Versioning?

Semantic versioning is simply a set of rules that dictate the types of changes that increment the version number or more precisely each of the three numbers representing the version. It's also called semver and has the v.v.v form. For example 6.0.1. Each part has a name, and they are from left to right major, minor, and patch.

The developer of the package should adhere to the following rules when adding any features or making any changes:

Semantic Versioning is optional i.e not all developers are required to follow it when versioning their packages or apps but it will make your life easier.

Composer provides many ways that you can use to specify non-exact versions:

These are used to specify a range of versions, not an exact version which enables you to add a package in version 6.0.0 today and have an updated version later.

Tilde and caret version constraints are supported in Composer and they are also the constraints used in semantic versioning. This means you can enforce the Semver rules using Composer.

When you run the composer install in a project, the package that corresponds to each version in the composer.json file is installed.

Let's see how the tilde operator used with an example:

Now, let's see an example of the caret operator:

You also need to know that semantic versioning has different behavior on versions before 1.0.0 (i.e before a stable release). The minor versions can break backward compatibility. So, be careful when you are using use the tilde operator as you may install a version that breaks backwards compatibility.

We have introduced the basic concepts of the semantic versioning system used in Laravel 6 and seen examples of how it works and how it allows Composer to install newer versions of the dependencies when they are available using the tilde and caret symbols.