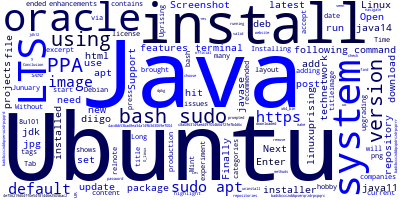 Java 11 is the LTS Version

Java 11 is the LTS version of Java. As Java 8 has ended support in Junuary 2019, companies will be upgrading their projects to current LTS version.

Java 14 is the latest version which has brought many new features and enhancements.

It's not recommended to use Java 14 in production but you can use it for hobby projects or to experiment with the new features.

Open a terminal and start by adding the Linux Uprising PPA, which contains Oracle Java 11 (LTS) and 12 installers for Ubuntu, Linux Mint and Debian,using the following command:

On Ubuntu 19.04, you don't need to update your system packages using:

You need to accept the license (press Tab to highlight OK and hit Enter): Let's make it the default version in our system using:

You can check your installed version of Java using: You can uninstall Java 11 from your system using:

You can find the packages of Oracle JDK 14 for Ubuntu from the Linuxuprising PPA repository.

Open a new terminal and run the following command to add this PPA to your system:

Next, you need to run the following command to update your system repositories:

Finally, you can install Java 14 on your system by running the following command:

You can set Java 14 as the default version in your system using oracle-java14-set-default:

You can also install Java 14 on your system without using a PPA.

Next, open your terminal and navigate to where you have downloaded the deb package and run the following command:

In this post, we've seen how to install the latest Java 14 version from Oracle in our Ubuntu 20.04 system. These methods are also valid for Ubuntu 19.04 systems.