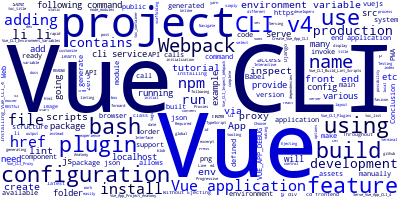 Vue CLI 4 is the latest version of the Vue Command Line Interface. Throughout this tutorial, we are going to learn to use Vue CLI to generate our Vue front-end application.

In this tutorial, we're going to see:

The Vue CLI v4 provides a new experience to developers as it allows you to easily generate new Vue projects with zero initial configuration but once your project needs more control you have the possibility to add more configuration options using plugins. Unlike create-react-app, you can customize your configuration without ejecting but only via Vue CLI plugins.

The Vue CLI is a complete tooling system that provides many features, out of the box, such as:

You can install the Vue CLI v4 from npm using the following command:

This will install the Vue CLI 4 globally on your system so depending on your npm configuration your may need super-user access i.e add sudo on debian-based systems.

Vue is using scoped packages for various packages such as the cli using the @vue namespace.

If you are using yarn instead of npm, you can run the following command instead:

Using the Vue CLI 4, you can create or generate a new Vue app by running the following command from your terminal:

Choose the features you need in your application and press Enter. Wait for application to get generated and for packages to install before you can use your newly created Vue application.

After generating the new Vue application using Vue CLI v3, you can use various built-in scripts to work with the application. Navigate inside your project's root folder and run the following command in order to serve your front-end application using a local development server:

This is the output you are going to get:

Using your web browser, you can navigate to http://localhost:8080/ to see your Vue application up and running. 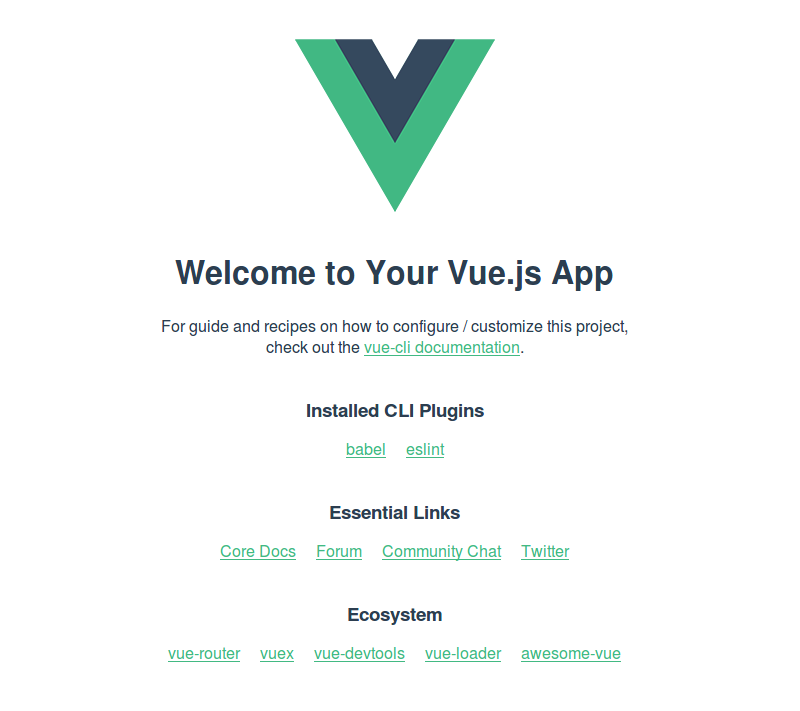 The Vue front-end application generated with Vue CLI v4 has a special directory structure. Let's use the tree command to display this structure excluding the node_modules folder which contains installed packages:

The output is similar to the following:

The Vue CLI v4 provides many other npm scripts (build and lint) which setups zero-configuration development and production environments with various features such as hot code or module reloading, concatenation, minification and linting etc.

If your open package.json of your project you'll see different available (serve, build and lint) scripts:

All scripts use the vue-cli-service which has ready webpack configurations for development and production so you don't have to deal with Webpack when you are just starting to work with your project.

Once your Vue application is ready, you can run the build command to build a production ready version of your project:

The lint command allows you to do code linting (static analysis for errors and bugs etc.):

You can use environment variables with Vue CLI v4 by adding a .env file with the following structure:

Your environment variable should start with VUE_APP_.

You can also define environment variables to be available for specific environments i.e development or production by adding an appropriate suffix to the name of the environment file. For example:

Sometimes, when making API calls from your Vue front-end application, you'll need to use a proxy to proxy calls in order to avoid issues such as CORS related to Same Origin Policy enforced by web browsers. Vue CLI v4 provides a built-in feature to use a proxy.

You can configure a proxy by simply adding a proxy object to package.json file. For example:

Vue CLI v4 makes use of plugins to provide different functionalities. When you choose features at the start of project initialization the Vue CLI installs and invokes the required plugins but you can also install any plugin and invoke it manually. For example, you can add the Progressive Web App (PWA) functionality using the following commands:

Inspect Your Webpack Config Without Ejecting

Aside from ejecting, the Vue CLI allows you also to inspect the Webpack configuration to see what's the Vue CLI is generating. This will help you to make sure the generated configuration is what you're expecting. In your project generated with the Vue CLI, run the following command:

This will display the Webpack configuration in your terminal but you can write it into a file by running the following command:

You can also inspect portions of the configuration file using dots paths:

In this tutorial, we've seen how to install the Vue CLI 4 and various features such as adding plugins, adding environment variables and proxying API calls.