AJAX Requests in Vue.js: Axios vs vue-resource vs fetch 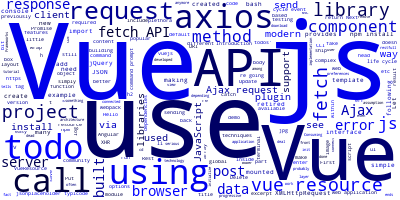 Consuming data from remote API servers via API calls, HTTP requests or Ajax requests is something that you often need to deal with, when you are building modern Rest API-based web applications which can be connected to front-ends built using libraries such as Vue.js.

Vue.js is a progressive JavaScript library for building user interfaces or the view layer in the MVC architecture so it doesn't make any assumption about the server technology or how to connect with a restfull API server.

Vue.js doesn’t ship with a way to do HTTP out of the box so we’re going to see how to send HTTP requests within a Vue.js web application, using many techniques and libraries such the popular axios http client, the retired vue-resource plugin or the browser's built-in fetch API.

If you have previously done any serious work with jQuery, you probably have used the $.ajax() method (that wraps the XMLHttpRequest object which's a little bit complex to use) to do Ajax requests.

Making API calls to some server from your Vue.js application is dead easy. In fact you have a plethora of options. In this tutorial we'll see some of the most used ways among the Vue.js community with some examples.

Frameworks such as Angular 2+ has built-in support for HTTP through the HTTP module, Angular 4+ has an even better implementation of the HTTP client. Before version 2.0, Vue.js has vue-resource a built-in plugin for making HTTP calls (Get, Post, Put and Delete), in Vue 2.0 it's retired but the module is still developed and used by the community, it's just not built into Vue anymore.

First of all, let's create a new Vue.js project.

You can use different ways to create a Vue.js project depending on your preferences and needs:

We’re going to use the Vue CLI to create a new project and install the required dependencies.

So head over to your terminal or command prompt then enter the following commands:

This tells the CLI to initialize a project based on Webpack. Next we navigate inside the generated project's root folder and run npm install to install all the dependencies.

Next we will be working at the Hello component in src/components/Hello.vue

Axios is a very popular JavaScript library for making HTTP requests. It' s an HTTP client that makes use of the modern Promises API by default (instead of the ugly JavaScript callbacks) and runs on both the client and the server (i.e Node.js). It can be used in Vue quite easily.

So head back to your terminal/command prompt and enter the following to install axios via npm:

Once that's finished. You can import axios into your Vue component then call the available methods such as .get()` for making GET requests, .post() for sending POST requests etc.

Let's see a simple example calling axios.get() from the component's created life cycle event so start by importing the library

Then add an array to hold your items

When the component is created send the GET request.

We'll be using JSONPlaceholder a fake online REST API for testing and prototyping powered by JSON Server and lowdb database. It provides you with fake data for testing purposes.

If the the request is successfully returned we assign the response data to our todos array (we don't need to explicitly parse JSON) we declared previously. If there is an error we just log the error to the console.

You can then use a v-for directive to loop over the array and print the todos in a Vue.js template

vue-resource is a library for Vue.js that provides an API for sending Ajax requests by wraping the JavaScript's XMLHttpRequest interface or by using JSONP.

vue-resource has many features such as:

vue-resource was once a part of the Vue.js library, but was retired in Vue 2.0. The project is still maintained and used by the community.

You can add it the your project using different ways. Let's install it via npm:

Head back to your terminal or command prompt then enter the following command to install the library into your current project.

The library needs a little bit of configuration before you can use it so go ahead and open the project’s main.js file and add the following:

Then call the global method Vue.use() to use the plugin

So we simply we imported the plugin and instructed Vue to use it. Now we'll be able to use the service $http in our Vue.js components.

Update your component's JavaScript code to make a GET call using $http.get() method inside the mounted() life cycle event that gets called when the component is mounted.

The template is the same as before.

You can also send a POST request with this.$http.post().

For a period of time, the underlying API for AJAX calls in the browser was XMLHttpRequest. Although this interface wasn't originally made for that, but it really did the job. Many libraries, that you have been using, are built on top of XMLHttpRequest (for example the famous $.ajax() in jQuery etc.).

Modern browsers have a better API designed specifically for making AJAX requests or HTTP calls. It's the fetch API.

The Fetch API provides a JavaScript interface for accessing and manipulating parts of the HTTP pipeline, such as requests and responses. It also provides a global fetch() method that provides an easy, logical way to fetch resources asynchronously across the network.

You can use this new API through a fetch() method, available from the global window object. The first and the only required argument is the URI/URL of the resource/API endpoint to fetch. Let's take a simple example.

In your previous Vue component. Add the following code in the mounted() life cycle event to send an Ajax request when the component is mounted.

The modern fetch API is much cleaner and easier to use than XMLHttpRequest. That's because it was created so that we can do AJAX simply without relying on external libraries which only wrap the complex XHR interface and add support for promises and other features.

You can also do POST, PUT and DELETE calls by providing an options parameter:

This is a simple example of using fetch. For more information and in depth look at the API, you can see Introduction to Fetch.

We have seen how to use different techniques to send Ajax requests in Vue.js. for communicating with Rest API servers or fetching resources.

You can use a plethora of options for doing Ajax calls such as Axios, vue-resource or better yet the browser's built in fetch API in modern browsers. You can also use jQuery via $.ajax() API, which simply wraps the XHR object in a simple to use method call but it's not recommended to include the whole jQuery library for the sake of using one method.