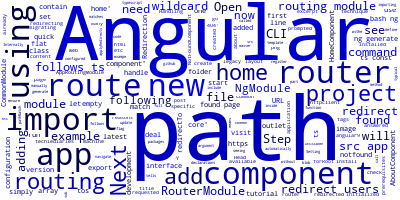 In this quick example, we'll see how to redirect users to a new URL path or component using the Angular 9 router and how to deal with not found pages and redirect to a 404 component if no match is found using wildcard paths.

If you are new to these how-tos, check out how to install and set up a project and the prerequisites.

Why redirecting to new paths in Angular 9?

Redirection is common technique in web development where a specific URL path is redirected to a new one for many reasons such as migrating a legacy application or if the requested page is not available, etc.

We assume that you already have a development machine with Angular CLI installed and that you have initialized an Angular 9 project.

When you create your project with Angular CLI, you will be prompted if Would you like to add routing? If you answered with Yes, a routing module will be created automatically and you can simply start adding your app routes.

Otherwise, you will need to set up routing manually.

Step 1 – Setting up routing in your Angular app

Before seeing how to redirect users to new paths or components, we first need to set up routing in our Angular 9 project.

Using the --flat flag will ensure that the routing file will be added inside the src/app folder without a sub-folder.

Using the --module=app tells Angular CLI to register the routing module as a part of the app module which means adding it in the imports array of the src/app/app.module.tsfile.

Open the src/app/app-routing.module.ts file, it should contain the following code:

This is a typical Angular module and we need to add routing configuration to it.

Let's now add the router configuration to the routing module. Start by importing Routes and RouterModule from @angular/router as follows:

Next, define a routes array that will contain our routes as follows:

Next, include call the forRoot() method of RouterModule withe routes array as argument as follows:

Next, you need to add the router outlet to the app template. Open the src/app/app.component.html file and update it as follows:

That's it we have configured the router in our Angular 9 project.

Step 3 – Adding components to the router

Next, before see an exampe of how to redirect users to new paths or components, we need one or more components in our project. Head to your command-line interface and run the following commands:

Next, in the src/app/app-routing.module.ts file import the components as follows:

Next, add the routes as follows:

Step 4 - Redirect the empty path to the home path

Now that we have added routing to the home and about components, let's see how to redirect users to the /home path when they first visit our app from the empty path.

We simply need to add a new route that matches the empty path and redirect it to the /home path as follows:

Now, let's see ho to handle 404 not found page in Angular. Head back to your terminal and run the following command to generate a not found component:

Next, open the src/app/app-routing.module.ts file and add these two routes:

Don't forget to import the component in the routing module as follows:

We use the wildcard path denoted by ** to catch any non existing routes and we use the redirectTo property to redirect them to the /404 path which maps to the not found component.

In this tutorial, we've seen by example how to redirect users to different paths in your Angular app and how to handle 404 not found or invalid paths using wildcard paths.

We used the latest Angular 9 version as the time of the writing.