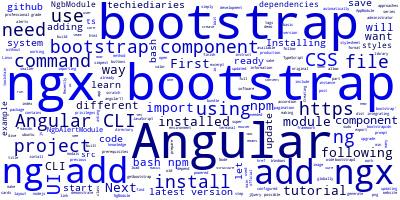 In this tutorial series, you'll learn to use Angular 11 & Bootstrap 4 to build professional grade UIs.

In this first part, you'll learn about the different ways you can use to add Bootstrap 4 to your Angular 11 project such as ng-bootstrap, ngx-bootstrap and the old way (with jQuery).

You'll also prepare a project that will be used to demonstrate the different components using Angular CLI 11.

First let's start with the prerequisites.

If you want to follow this tutorial, step by step from scratch, you'll need to have some prerequisites such as:

If you are ready then let's dive in!

If you don't have the latest version of Angular CLI installed, you first need to run the following command to install it:

This will install Angular CLI 11 globally on your system so you need to make sure you have npm configured to allow to isntall packages system-wide without super user privileges. Otherwise, simply add sudo before your command in Linux and macOS systems or use an administrator command prompt in Windows.

If you already have a previous version of the CLI installed, you need to update it to the latest version. For a tutorial on how to upgrade the Angular toolchain, see Angular 7 Upgrade: Ng Update Angular 6 CLI

Now that you have installed the latest version Angular CLI, you can now create your Angular 11 project using the following command from your terminal or command prompt:

The CLI will be asking you for some information about your project, such as if you want to use the Angular Router (Yes) and which stylesheet format you want to use (CSS).

Wait for the CLI to finish its work i.e generate the directory structure and files then install the dependencies.

After that, you'll have your project ready!

Once your project is ready, let's start by adding and integrating Bootstrap 4 with Angular 7.

There different approaches that you can follow to add Bootstrap to your project. For example:

Next you need to install ng-bootstrap from npm using the following command:

Wait for the package to install. Next open the src/app/app.module.ts file and import the main module of ng-bootstrap which is NgbModule into your project's main module using the following code:

For the sake of making your Angular 11 production bundle smaller, you can also import only the needed modules for the Bootstrap 4 components that you want to use in your project, such as buttons, cards, modals, pagination or alerts. For instance, this is an example for importing the NgbAlertModule module:

You can find all the available components and modules from the official website.

Next you need to instruct Angular CLI 11 to load the Bootstrap styles.

There are many ways to do that. The simpest method is by using the src/styles.css file and adding the following code:

First, you need to install ngx-bootstrap in your project from npm using:

Next you need to load Bootstrap 4 CSS file using one of the possible ways, such as adding the following code in your src/index.html file:

Alternatively, you can also use the ng add command of Angular CLI 11 to automatically add ngx-bootstrap to your project by simpy running the following command:

The CLI will take care of installing all the required files and update it any necessary configuration files in your behalf.

You can also use the ng add command to add individual components. This is a list of available commands:

In this tutorial, we've seen different ways to include Bootstrap 4 in your Angular 11 project such as bootstrap, ng-boostrap and ngx-bootstrap. We've seen how to use the ng add command of Angular CLI v11 to automatically add ngx-bootstrap in your project without any manual intervention.

In the next tutorial, we'll continue by implementing a professional-grade UI with Bootstrap 4 components so stay tuned!