How to Delete Local/Remote Git Branches 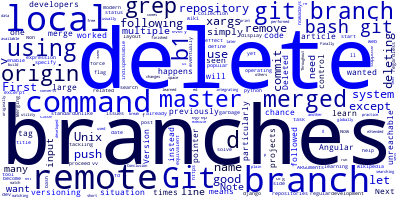 If you have previously worked with Git for versioning your Angular code, there is a good chance that you had some situation where you wanted to delete a remote branch or multiple branches. This happens many times to developers, particularly in large projects.

In this article, we'll learn:

Before we proceed to learn how to delete local and remote branches in Git, let's define what's a Git branch and the side effects of deleting branches.

Let's start by learning how to delete a local branch.

Note: You can also use the -D flag which is equivalent to the --delete --force command instead of -d. This will enable you to delete the local branch regardless of its merge status.

Unlike local branches, you can't delete a remote branch using the git branch command. However, you need to use the git push --delete command, followed by the name of the branch you want to delete. You also need to specify the remote name (origin in this case) after git push.

How Can You Delete All Non-Merged Git Branches?

Now that we have seen how can you delete local and remote branches in your Git repositories, let's suppose you have multiple Git branches. How can you delete the branches which have already been merged? At once instead of deleting them branch by branch.

Note: Merging is performed using the git merge command and it simply means integrating changes from another branch.

First, you need to get all the branches that are merged in the remote repository using the following command:

If you have one merged branch, you can simply delete the merged local branch using the following command:

If you want to delete it from the remote repository use the following command:

Remove All Local Branches not on Remote

You can remove all local branches not on the remote repository, you can use the following bash command:

grep is a command-line utility for searching plain-text data sets for lines that match a regular expression. Its name comes from the ed command g/re/p (globally search for a regular expression and print matching lines), which has the same effect. grep was originally developed for the Unix operating system, but later available for all Unix-like systems and some others such as OS-9.

Delete All Your Local Git Branches Except Master

If you have finished with local Git branches, it's usually a good practice to remove them to free their space. You can simply run the following command:

We use the grep -v "master" command to search for branches except the master then we delete them using the git branch -D command.

Throughout this article, we've seen how you can delete remote and local branches from your Git repositories. We've learned: