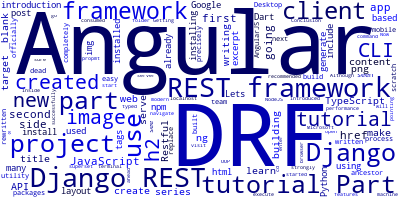 This is part 2 of these tutorial series to learn how to use Python Django framework with Angular 2+ (When writing this second tutorial part It's already Angular 4 ) to create Restful or Rest based web apps.

There are many frameworks or packages to build Rest APIs with Django .In this tutorial we are going to use Django Rest Framework or DRF which makes the process of building restful APIs dead easy .

Angular 2+ or officially just Angular is a client side framework built by Google to create Desktop and mobile web apps with JavaScript ,TypeScript or Dart .

Angular was completely rewritten from scratch by Google team using TypeScript to replace its ancestor AngularJS which was written In JavaScript .Angular has more performance and more features and it can be used both on the client side and server side .

Although it can be used with JavaScript and Dart ,It's recommended to use Angular with TypeScript which is a modern strongly typed OOP superset of JavaScript created by Microsoft .

Getting started with Angular 2+

Lets start by installing the Angular CLI so go ahead and open your terminal or command propmt then enter :

Make sure you have NodeJS and NPM installed on your machine .

First navigate inside your Django project folder then execute :

A new Angular 2+ will be created for you !

You can serve it using ng serve

Now you can visit your app by pointing your browser to http:localhost:4000

In the second part of these tutorial series to learn how to use Django Rest Framework or DRF for building a Rest API consumed with an Angular 2+ app ,we have introduced Angular and created the Angular project which makes the client part of our Django project .