How to Create and Publish Node.js Modules to NPM 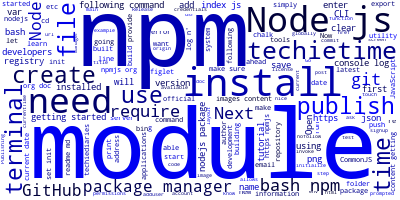 In this tutorial, we'll learn how to create a Node module and publish it to the npm registry.

Thanks to Node.js JavaScript developers can build server applications and become full-stack web developers. Node is built on the V8 runtime (Rendering engine behind Chrome) and is written in C++ which makes it very fast. Despite being built, in the first place, as a server technology - developers are using it to build tools that can be used for development, particularly for automating time consuming tasks such as assets minification, compressing and building etc. As a result Node didn't just affect the world of server applications but has also changed client side development.

In this tutorial, we'll learn how to get started using NPM, the official package manager for Node.js

You can access the npm registry from the http://npmjs.org/ address.

You can use npm to publish open source Node.js modules for free but your module will be publicly accessible for anyone to use. If you want to publish a private module you can simply opt in for a paid plan.

NPM is the official package manager for Node.js that you can use to install Node.js modules from the command line interface.

Your First Steps with Node.js

You can make sure you have Node installed on your system by running the following command in your terminal:

Next you need to make sure you have the latest npm version:

If you get an EACCES error you just need to fix the npm permissions.

After getting the latest npm version installed, the next step would be to create an npm account which is needed of you want to be able to publish your package(s).

Go to this signup page and submit the necessary information to create your account then make sure to confirm your email address.

Now you need to provide the npm executable with your configuration information. Simply run the following commands in your machine:

Next you need to add a user using the following command:

This will ask for your credentials - the username and email.

You just need to do that for the first time, npm will save your information in the ~/.npmrc file so you don't need to re-enter them each time you want to publish a new npm module.

Now let's start building our first Node.js module and publish it to npm.

An npm module or a Node.js module is simply a CommonJS module. Don't worry if you don't know anything about CommonJS. To be able to create a module you just need to know these two things:

The boilerplate for any module that you create should be similar to the following example:

The module we are going to build is a simple command line utility that prints the current date and time to the console when you invoke it via your terminal CLI on linux and macOS or the command prompt on Windows.

So go ahead and create a folder to host your Node.js module

At this point you should have a name for your npm module and you should make sure you choose a unique name by searching the npm registry for your chosen name. You can also use namespaces.

Next you need to initialize your npm module. In your terminal run the following command:

You'll be prompted for some information (name, version and license etc.) that you need to enter and then npm will create a package.json file. Basically this is your first npm module.

Next, create and index.js file (the main entry of our module):

We are going to print the current time and date in a nice colorized format so we need to install some useful npm modules to re-use them in our module.

Next, let's install clear - a handy npm module which allows you to clear the terminal screen:

Next, let's install figlet - a module which allows you to create ASCII art:

Since we are creating a CLI utility, we don't need to export any code but we need to require the modules we've just installed. Open the index.js file and add the following content:

This is a CLI utility so we need to make it globally available. To do that we have added #!/usr/bin/env node at the top of the index.js file:

Next, open the package.json file and add:

This tells npm the name of the file to execute when we invoke our module from the terminal.

Now you need to install your module globally using the following command from your module's root folder:

You can run techietime from any location in your terminal. You should get the current time printed.

Publishing your Module to The NPM Registry

Head back to your terminal and navigate to your module's folder:

Next, enter the following command to publish your module to npm:

Before publishing it's preferable to add a readme.md file for documenting your module:

Open the readme.md file and add your module info. For example:

A Node.js module that prints your current date and time from your terminal.

You are more than welcome to contribute

The npm registry is not the only way to make your module available for others to use. You can also push it to GitHub. It can be installed using the repository URL. For our case:

Make sure you have Git installed and then initialize a new repository using the following commands:

You will be prompted for your GitHub credentials, enter them and hit Enter then wait for your repository to be pushed to GitHub.

That's it. You can get the code of this tutorial from this GitHub repository.

In this tutorial we have seen how to create a Node.js module, publish to npm and push it to GitHub for other developers to be able to install from npm.