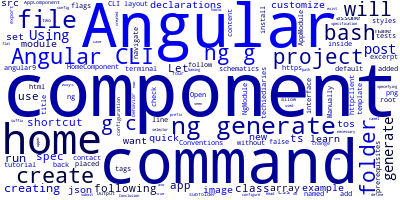 In this quick how-to post, we'll learn how to use the ng generate component command of Angular 9 CLI, or its ng g c shortcut command, for creating Angular 9 components in your project.

If you are new to these how-tos, check out how to install and set up a project and the prerequisites.

Open a new command-line interface, navigate into the root of your Angular project and run the following command:

Or you can also run the following command:

Angular CLI will generate 4 files for the component in the src/app folder of your project:

We can also customize where the component's files are placed.

Angular CLI adds the component to the declarations array of the module.

By default the ng generate component or ng g c commands, generate a folder and four files for the component. But you can change the default behavior if you want in two ways:

Let's generate an about component without a subfolder and without the specification file.

Head back to the terminal and run the following command:

Let's now see by example how to configure the CLI from the angular.json file to not generate .spec.ts file for a component.

Go back to your terminal and run the following command:

How to Set the Component's Folder

You can aso define the folder of the component by specefying the path as follows:

This will create the contact component inside the components folder which will also be created if it doesn't exist inside the src/app folder of the project.

You can also create Angular components manually by creating the necessary files and add the component's class to the declarations array of the module where it should be used.

When you create an Angular component with Angular CLI, it will follow these conventions:

In this howto post, we have seen how to create components in Angular 9 using the ng generate component command or its ng g c shortcut command.