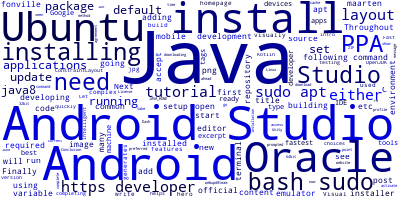 Throughout this tutorial, we'll see how to install Java 8 and Android Studio on either Ubuntu 18.04.

Android Studio has the best and fastest tools for building apps for each type of Android devices.

Android Studio has many features such as:

Java 8 is required for developing Android applications and as such you need to install Java first. You have many choices for Java:

Let's install the Oracle Java using a PPA by running the following commands:

First start by adding the PPA:

Next, you'll need to update the cache using:

When installing these packages you will be prompted to accept the Oracle License agreement. You need to accept it for the installation to complete.

You should get this message: *Oracle JDK 8 installed *.

After installing Oracle Java, you need to setup the JAVA_HOME environment variable which should point to where Java is installed.

To set Oracle JDK8 as default, install the "oracle-java8-set-default" package by running the following command:

You can then either re-open a new terminal or run source /etc/profile in your current terminal to activate the new environment variables.

So go ahead and start by adding the PPA ppa:maarten-fonville/android-studio

Next run the update command:

This will take some time to download Android Studio and install it.

After installing Android Studio, you can access it from Unity Dash.

In this tutorial, we've seen how to setup a development environment with Java 8 and Android Studio in Ubuntu 18.04 which are required for developing Android applications.