Constant in JavaScript: const vs. Object.freeze() 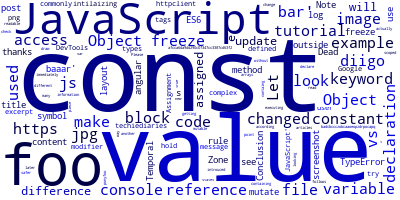 In this tutorial, we'll look at the difference between const and Object.freeze() in JavaScript.

The const keyword is used as a modifier before a variable to make it a constant i.e its value can't be changed once it's assigned when intilaizing the variable. For example:

If you try to update the value of the foo variable, you will get a TypeError with Assignment to constant variable message. This is a screenshot from Google DevTools: Note: let and const are introuced in ES6 as a new way to declare variables. const variables can only be assigned during their declaration.

Please also note that the value itself of a const variable is mutable (can be changed) but the symbol that references the value is what actually can't be changed at a later point to reference a different value.

The const keyword is block-scoped i.e you can not access it outside its immediately containing block and follows the Temporal Dead Zone rule which states that a variable can’t be used before its declaration.

Let's see this example of code and how we can read it:

By just looking at this piece of code and thanks to the const keyword, we can draw many conclusions:

This makes our code more readable and also safer!

For more information, check out Let’s use const! Here’s why.

Since the const keyword makes the reference constant but not the value itself, we can update the values for arrays and objects without getting TypeError. For example:

This is a screenshot of the code executing in the console: So, as you see, we can mutate the value of the object.

How to Make a Constant Object in JavaScript?

We simply use the Object.freeze() method. Let's apply it to our previous example: After applying the Object.freeze() method to foo, we will not be able to mutate its value but it doesn't throw any error, it just silently prevent the mutation of the value.

In this quick tutorial, we've seen how to create constant variables and objects in JavaScript thanks to const and Object.freeze() introduced in ES6.