How to Install Vue.JS in Laravel 7/6 By Example 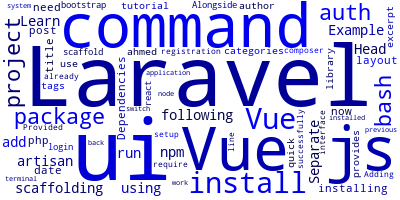 In this quick tutorial, we'll learn how to install and use the Vue.js library in your Laravel 6 or Laravel 7 project using the laravel/ui package.

The laravel/ui is a separate package that provides the UI scaffoldings for bootstrap, vue and react. Alongside with the auth scaffold for login and registration.

Provided that you already have a Laravel project setup. Head over to your command-line interface and run the following command:

Adding Vue to your Laravel 7/6 Project

After successfully installing the laravel/ui package, we can now add vue to our application.

Head back to your terminal and run the following artisan command:

If you also need to add the auth scaffolding, add the --auth switch to the command:

Now, you also need to install the Vue.js dependencies from npm using the following command:

You should have node and npm installed in your system for the previous command to work.